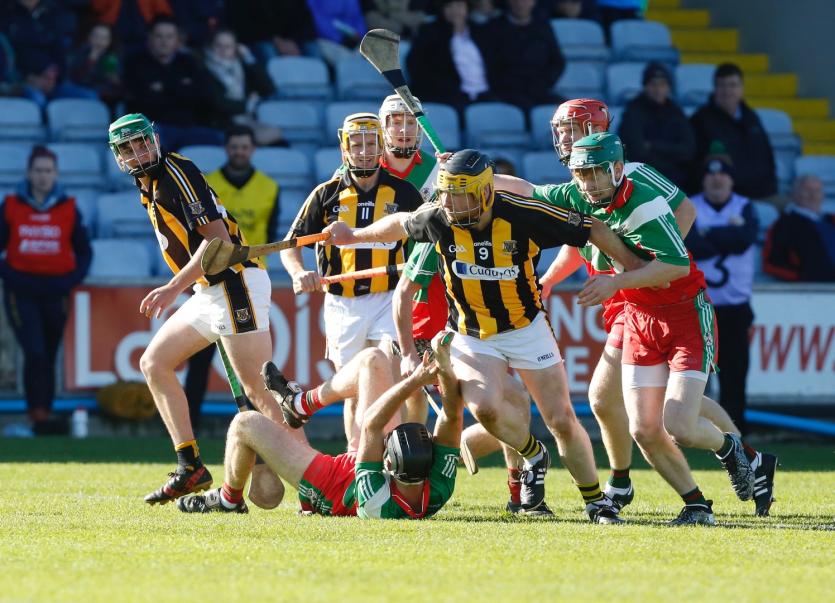 Tomás Burke comes out of defence with this ball for Camross. Pic: Alf Harvey.

Camross will defend their Laois SHC title against Rathdowney-Errill in this year's final, as they overcame a misfiring Borris-Kilcotton side in O'Moore Park on Sunday.

While Camross had the talent and character to come up with the scores when they needed them, they were not at their best either. However, Borris-Kilcotton's shooting let them down time and again, particularly in the first half, as Camross held them at bay to secure the win.

Playing with a strong wind at their backs in the first half, Camross wasted no time in taking the lead as Eoin Gaughan managed to thread a shot between the posts from a tight angle.

Zane Keenan then added a free before landing the score of the half, a wonderful sideline cut taken from just in front of the tunnel. Borris-Kilcotton were really struggling to dial in their shooting against the wind, and Camross were taking advantage.

Mark Dowling pushed them four ahead after that and then another Keenan free kept Camross on the front foot, with Borris-Kilcotton's shooting still way off target.

Tensions then boiled over midway through the first half when a row broke out in front of the stand, and players from both sides piled in. When order was restored, Tomás Burke, Andrew Collier and Danny Fitzpatrick were yellow-carded.

Borris-Kilcotton finally got off the mark in the 18th minute, as PJ Scully was fouled and duly pointed the free, but Camross were still in control. Zane Keenan landed another free before Lorcan Burke launched one over from distance, the gap now out to six.

Eoin Gaughan's second score made that seven, before Borris-Kilcotton finally started to find something resembling form. Scully landed their first from play, and then added a free to see them register back-to-back points for the first time.

Ciaran Collier caught a puckout, sprint clear and fired over the bar after that for a super point, but Borris-Kilcotton should have had a goal before the break. Stephen Dunphy was put through on goal only to see his shot brilliantly saved by Thomas Dunphy, and moments later, PJ Scully's handpass was doubled on by Dunphy, but it hit the crossbar and Camross survived. Play was called back for a foul, and Scully sent it over the bar.

That left four in it, but a late score from Mark Dowling left Camross 0-10 to 0-5 ahead at half time.

Borris-Kilcotton were lucky to only be five down at the break, but they started the second half with a bang. Aaron Dunphy was fouled as he neared the penalty area, and from the resulting 21 yard free, PJ Scully's powerful shot flew to the back of the net.

The Borris-Kilcotton crowd were in full voice now, and two Joe Campion points in the space of minute drew them level. With momentum on their side, captain Matthew Whelan put them ahead for the first time, as he launched a long-range effort between the posts.

They didn't have long to enjoy the lead, as Zane Keenan pointed twice moments later. The first was from a free, and then he added a super point from play to see Camross lead 0-12 to 1-8 after 40 minutes.

Another Keenan free sent Camross two clear, but PJ Scully again provided the response from Borris-Kilcotton, as he landed a 65. Just as Scully responded for Borris-Kilcotton, so Keenan did for Camross, pointing two frees to see them three ahead with the minimum of fuss.

Joe Campion and Ciaran Collier then traded scores, and with then minutes left, Camross were still in control with a 0-16 to 1-10 lead.

Zane Keenan had some chances to stretch that lead further, from a 65 and a free, but missed both. PJ Scully then landed a long range free, and Borris-Kilcotton were still in with a chance.

However, that was all but extinguished with five minutes to go, as a slick Camross attack saw the ball worked to Mark Dowling in the penalty area, and he made no mistake.

Borris-Kilcotton needed a grandstand finish to have any hope of coming back, but there was no sting in the tail from them, as Camross held on to seal another final place.