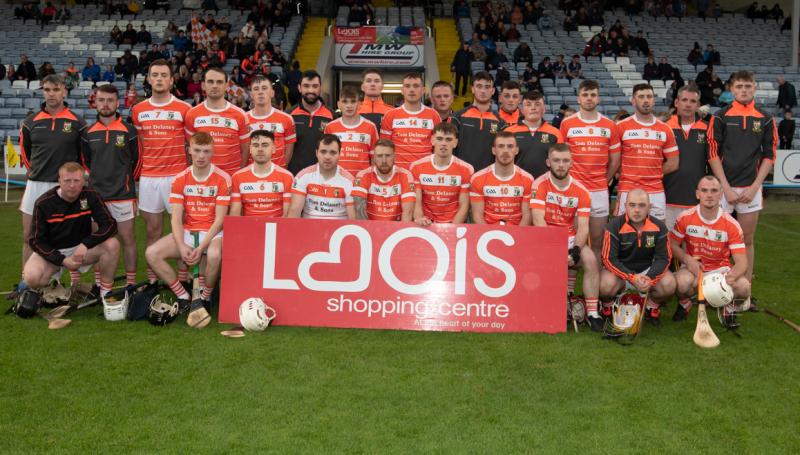 The Slieve Bloom side which defeated Camross on Saturday night. Pic: Denis Byrne.

Despite playing second- fiddle to Camross for much of this Laois IHC final, and having an extra man for large parts of the contest, Slieve Bloom showed great steel to launch a late rally to claim the victory in this thrilling decider on Saturday night.

A haul of 2-3 from Ciaran and Ben Conroy in the last fifteen minutes was enough to get them over the line.

The teams met in round two of this year’s championship, with Slieve Bloom having seventeen points to spare over Camross on that day. They were made work much harder for victory this time round, though.

Ciaran Conroy converted two frees, but Camross hit back with vengeance after ten minutes with the first goal of the game. Tadgh Drennan drove a low ball into full forward Darren Drennan’s path. He collected, made a bit of space, and finished low into the corner.

Ciaran Conroy leveled with a free, before an incident occurred that you would’ve thought would swing the contest Slieve Bloom’s way. Camross’s James O’Keeffe let his adrenalin get the better of him, and swung out at a Slieve Bloom player. He received his marching orders, much to the delight Slieve Bloom support.

Joseph Ryan scored a lovely point for Camross, before Slieve Bloom found the back of the net. Martin Delaney’s shot was too powerful for Niall Cuddy in goals, as Slieve Bloom looked to take advantage with the extra man.

Camross struck over the next three points though, as a Darren Drennan point was followed with an exhibition of free-taking from centre back Eoin Dowling, nailing two in a row from distance. Ben Conroy, who was being watched attentively all night by the Camross backs, scored his first, but Eoin Dowling converted another free to put his side back in front.

Camross captain Kevin Lalor shot over the last score of the half, as Camross went in 1-7 to 1-5 ahead.
Things didn’t look any different after the interval, as Camross kept winning all their individual battles. However, they did receive another huge blow when they lost defender Tadgh Drennan to injury.

Daniel Delaney and Ciaran Conroy exchanged frees, before Camross doubled their lead with Mark Conroy and Kevin Lalor finding the target. Camross certainly didn’t look like a team who were down a man, as it seemed they gained a psychological advantage from the early dismissal.

Ciaran Conroy sent over a ’65, but Eoin Dowling responded with his fourth free of the evening for Camross. With eighteen minutes of normal time left, the Camross legs began to tire from the relentless energy spent. The Conroy brothers, particularly Ciaran, picked it up a couple of gears.

A Ciaran Conroy free kick-started the comeback, with Ben Conroy following suit with a splendid point from out near the terrace side. Ciaran added another, before Ben fired in a goal to put his side back in the ascendancy for the first time in a while.

His shot from distance bounced and caught Niall Cuddy out in goals. David Mortimer hit back with a free for Camross, but a second Ciaran Conroy goal meant the men wearing orange and white were going home with the trophy.