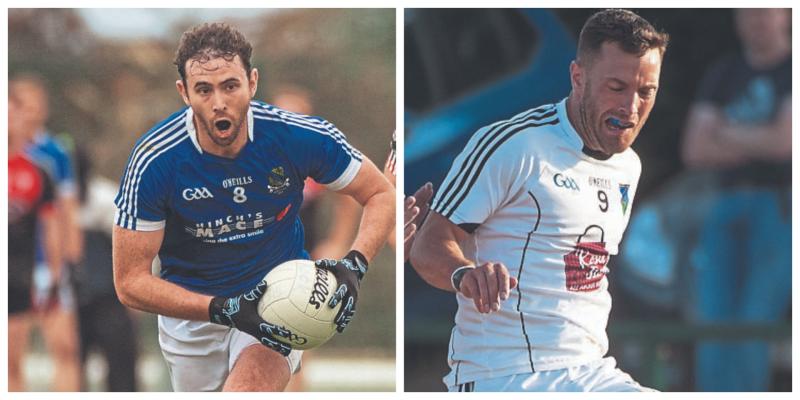 Colm Coss and Niall Donoher will be key men this Saturday.

Having already upset the odds and defeated Mountmellick Gaels once this year, Courtwood will look to repeat the trick again this Saturday night in a highly anticipated Laois IFC final.

As has generally been the case in the IFC, the recently relegated side, Mountmellick Gaels, were widely expected to breeze through the competition and return to the SFC ranks, especially so given the fact they were allowed to retain the Castletown players.

Courtwood shattered that illusion in Round 1 by claiming a narrow victory, and they have kicked on since, picking up convincing wins over Timahoe and Portlaoise to book their place in the final.

Manager Eddie Kinsella is getting the most out of this talented young team, and they will be primed for another cut at Mountmellick on Saturday night.

Niall Donoher will roam and probe and get their attack in gear, while they have an abundance of scoring threats too. In just three games, they have scored 7-43, an average of a little over 21 points per game, which is mightily impressive.

It should be hard to beat, but Mountmellick Gaels can go (literally) one better, as they have averaged a little over 22 points per game in their four outings, scoring a total of 10-60.

For their part, perhaps the best thing that could have happened Mountmellick Gaels was losing that game, as it gave them an early warning of what Courtwood were capable of. Mountmellick would have been aware they entered this competition as favourites, so the early shock could have done them a favour.

They took the defeat in their stride, bouncing back with big wins over Barrowhouse, The Rock and then Rosenallis in the semi-finals.

They are, on paper, probably the better side, although not by much. Even though they lost that opening round game, they are probably still slight favourites here. They are a bit more physically imposing than Courtwood, although there is enough room in O'Moore Park for Courtwood to play to their own strengths.

Courtwood will be a senior club soon, the age profile of their squad would point to that. The Clonaslee team which was relegated from the SFC this year, if they are forced to go it alone at IFC level in 2019, would struggle against either of these teams next year.

That's a side issue for now though, because neither of these teams are contemplating that. The reality of this clash is that is could well be the best game O'Moore Park sees this weekend. Both teams have potent attacks, there is an awful lot at stake and they will be going hell-for-leather at each other.

In spite of Courtwood winning that opening round game, we have a feeling that could have worked to  Mountmellick Gaels' favour. That's why they get the nod to win this one, but if the form of both teams holds, there should only be a score or two in it.