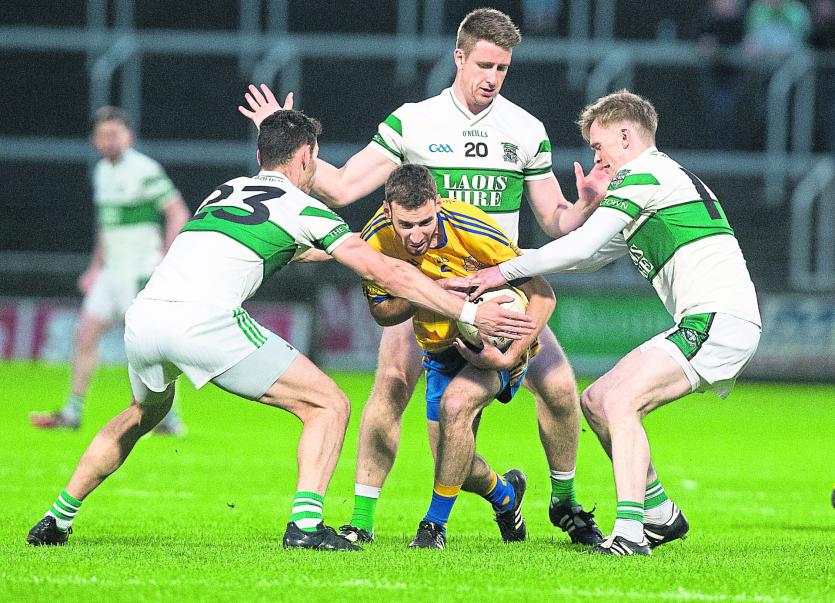 Adam Campion is surrounded during the last SFC meeting between the teams in 2016. Pic: Alf Harvey.

St Joseph's and Portlaoise will do battle in the Laois SFC semi-final this Sunday afternoon, as the reigning champions look to take another step towards retaining their title.

A cursory look at the form guide would suggest a comfortable victory for Portlaoise, who have arrived at this stage of the competition with the minimum of fuss.

Victories over Ballyfin Gaels, Graiguecullen and Ballyroan Abbey have seen them show their formidable talent in spells, but they will likely need a more concerted effort against St Joseph's.

The Kellyville men have progressed well through the competition so far, with solid victories over The Heath and Portarlington setting them on their way. They were not as convincing last time out against Stradbally, but managed to grind out a result in the end.

Now, they will look to rediscover the form which brought them so close to upsetting the champions back in 2016.

On that occasion, St Joseph's held a three point lead with ten minutes to go, only to see Portlaoise score 1-1 in the closing stages. Colin Campion then curled over an incredible free with the last kick of the game, and St Joseph's had earned a draw.

Portlaoise would win the replay, before eventually losing to Stradbally in the final. However, they have improved a lot since then, and are approaching their hard-running, high-scoring best at the moment.

They have done so while steadily transforming the team and adding depth to the panel, as seven of the side which started that 2016 draw did not start, for various reasons, against Ballyroan Abbey last time out.

The most remarkable thing, however, is that St Joseph's have had an even bigger player turnover in the same period. Eight of the team which came so close to victory on that night did not feature against Stradbally.

It's an incredible turnover in a two year period for a rural club, but they have gotten better since then.

The one thing which gives them an outside chance against Portlaoise is their mobility, as they have pace in the team and they can also defend deep if needs be. They also have a few man-markers and a strong midfield, so the nucleus of a challenge is there.

As we have repeatedly said, we have been waiting for St Joseph's to really have a go at winning a Laois SFC title, and this year they have managed to get to a semi-final.

There are concerns for them, namely their reliance on Michael Keogh for scores from play. He is a real livewire and his pace will cause Portlaoise problems, but Dylan Doyle is now showing good scoring form at corner-forward, which they will need.

Keeping tabs on the Portlaoise attacks is half the battle also, as they always seem to have a runner off the shoulder, as well as options in front of goal.

Bruno McCormack was, by his own standards, off the boil last time out as he failed to score from play, and even missed a few straightforward frees. He doesn't tend to play like that two games in a row, and Portlaoise will hope he's back to his best on Sunday, especially with Paul Cahillane and Brian Glynn sidelined.

What worked so well for St Joseph's back in 2016 was they defended very deep and counter attacked at pace, and they may opt to revert to that style of play. They haven't been as defensive this year as they have in recent seasons, but any space left in defence will be exploited by Portlaoise.

This may not be the final, but of the teams left, St Joseph's are probably the best placed to beat Portlaoise. It seems unlikely, but if they can avoid the early Portlaoise blitz, they'll give themselves an outside chance.

We still expect Portlaoise to win, but hopefully St Joseph's can at least make it competitive.