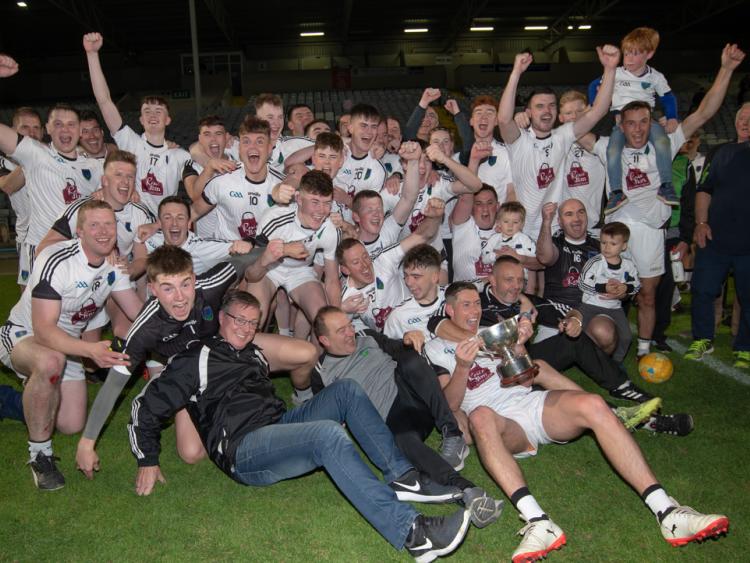 Courtwood are the 2018 Laois IFC champions after a brilliant display saw them past Mountmellick Gaels in O'Moore Park on Saturday night.

Despite edging out Mountmellick Gaels in the first round, Courtwood went into the final with the underdog tagline. It didn’t deter them in the slightest though, as their youthful team, aided by the class of Niall Donoher, had too much for Mountmellick Gaels.

Mountmellick Gaels, as expected with their experience, settled into this one the smoother. The inform Niall Mullen, who had racked up huge scores in previous rounds, slotted over a free. He then grabbed his first from play, before Courtwood got on the score sheet.

Danny Luttrell, who got the better of a fascinating midfield battle with Colm Coss, sliced over a free off the ground. However, Courtwood were dealt a blow when their captain, Matthew Kelly, saw a black card waved in his face by Brendan McCann.

Niall Mullen added another free for Mountmellick Gaels, but Courtwood came to life with four unanswered scores. Luke Doran found the target with a lovely point, before Niall Dunne followed suit to level affairs. Rory Doyle then left the Gaels defence in his wake, before feeding Dunne. Dunne hit it sweetly, but Eoghan Keogh pulled off a spectacular save.

Despite this, Courtwood were still in the ascendency. Luttrell had no difficulty knocking over the resulting ’45, before Luke Doran raised his second white flag after Niall Donoher laid it inch-perfectly into his path.

Mullen got Mountmellick Gaels back on the scoreboard and within one, but Courtwood finished the half the stronger. Some excellent link-up play led to Colm Wilson putting over from a distance.

Mountmellick Gaels, despite being outplayed for large parts, could’ve so easily went in with the lead. Niall Mullen’s free dropped into the square, and full forward Darragh Hanlon got a flick to it. It hit the inside of the crossbar and bounced out off the line. Courtwood took advantage of this piece of luck, as Luttrell scored another free just before the interval.

Danny Luttrell was all over the field throughout, and he released Luke Doran at the start of the second period, but Doran opted to take his point when the goal was at his wake. Mountmellick Gaels registered the next two points though to halve the deficit, as Mullen made no mistake with two frees.

Courtwood showed no signs of letting up though, and extended the gap to five through Danny Luttrell, Niall Donoher and Cian Doyle. Their defending deserves a mention as well, as they hunted the Gaels’ attack down in numbers.

Mountmellick Gaels needed something to breathe some air back into their sails, and they got it through a penalty. Niall Mullen sent a hopeful high ball in, and Karl Donoher won it well to force Colm Wilson to haul him down.  Jason Caffrey comfortably dispatched from eleven metres out.

The Gaels’ outfit looked to have picked up a burst of energy from this, as Mullen scored a fantastic team point that was started by Eoghan Keogh in goals.

However, Courtwood’s young legs kept motoring, and they dominated the remainder to assure victory. Cian Doyle and Sean O’Flynn fired over a point apiece, before full forward Alan Kinsella, who had been kept quiet by Gearoid Hanrahan, hit three excellent points late on.