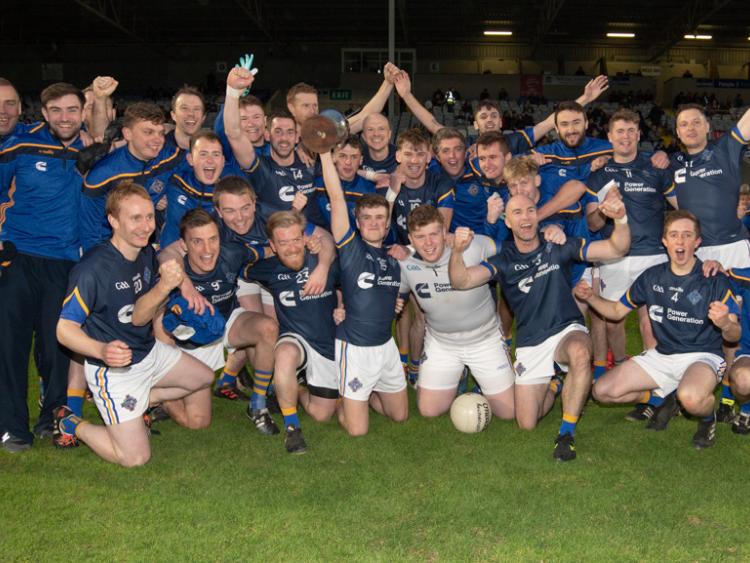 Annanough were tp made work extremely hard by O’Dempsey’s in this Laois JFC 'A' final clash, but teenagers Killian Horgan and Damien McCaul showed experience beyond their years to help the Vicarstown men end their forty-year wait for championship glory.

Annanough were fast out of the blocks here, as Killian Horgan swung over the first point of the day. The warning signs were there for them early on though, as O’Dempsey’s had plenty of possession, but couldn’t fashion any scores.

Damien McCaul, who kicked the winner from a placed ball for Annanough in their narrow semi-final victory over Park-Ratheniska, continued his good form with two frees, extending his sides lead to three.

O’Dempsey’s continued to hit some more poor wides in the following stages, and it wasn’t until the fourteenth minute that they managed to get on the scoreboard. A lovely ball was hit near the square by Eugene Nolan, and veteran Mark McCormack was there to knock over.

Elliot Scully could’ve been more ruthless for Annanough shortly after, opting for a point when a goal was on. Damien McCaul struck over a lovely score, his first from play, as Annanough led 0-5 to 0-1.

However, the game was a lot more even than the score line suggested, and that showed in the lead up to half-time. Brothers Daithi and Barry Howlin were at the heart of everything good about O’Dempsey’s in the remaining minutes of the half.

Barry caught and broke a lot of ball in midfield, while Daithi landed three points. Eugene Nolan, Mark McCormack and Barry Howlin also got on the score sheet, as O’Dempsey’s turned it around to lead 0-8 to 0-6 at the break.

The beginning of the second half was similar to the start of the first, as McCaul and Horgan again stood tall for Annanough. McCaul kicked off proceedings with a free, before Horgan split the posts with a point from play. The strong teenager showed he can kick frees as well, adding two to his tally in between.

Substitute Daragh Meredith flew all the way from Beijing for the final, and the big man made an impact, shooting over to reduce arrears for O’Dempsey’s to just one. However, O’Dempsey’s just couldn’t deal with the troublesome twosome of Horgan and McCaul.

Horgan rose highest to catch an O’Dempsey’s kick-out, and kicked the ball into McCaul. The corner forward showed blistering pace to brush past his marker and fire over his sixth of the evening.

The closing stages of the game were scrappy, as Annanough began to funnel men back to keep O’Dempsey’s out from scoring a crucial goal. Horgan then matched McCaul’s tally for the evening with a pointed free, as the pair battled it out for the man of the match award.

O’Dempsey’s, as they showed throughout this championship, never lay down, and the gap was back at two with a couple of minutes to go. Pat Maher jinked one way and then the other, before placing over a fine point.

O’Dempsey’s threw on the rest of their bench in an attempt to find a way past the Annanough rearguard, but they had just ran out of ideas. Annanough, after a long wait, walked up the steps of O’Moore Park to claim the prize.