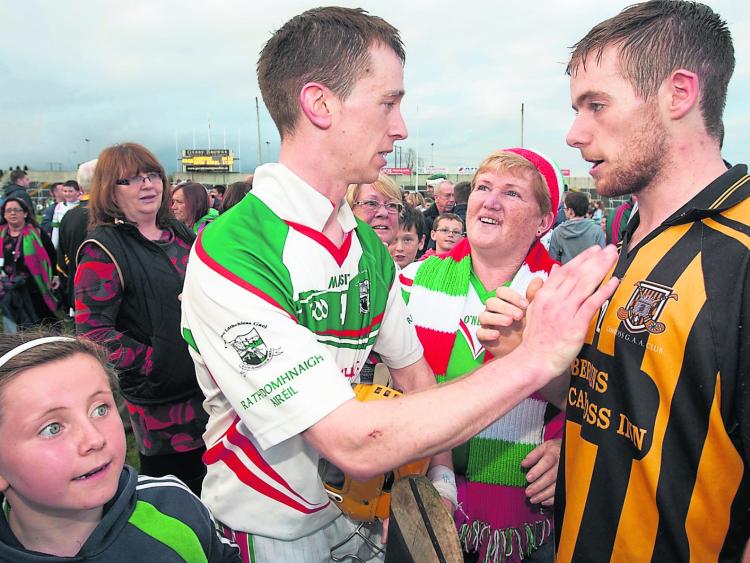 James Corrigan commiserates with Dwane Palmer after the

For the third time in nine years, Camross and Rathdowney-Errill will face off in the deciding game of the Laois SHC.

While the Laois SHC has been going through its most competitive spell in living memory, as the title has not been retained since 2003, both of these sides can lay claim to being the most consistent in the competition through that period.

Rathdowney-Errill have contested a final every second year since 2006, a sequence they have continued this year.

They won the first five finals they played in, with two of those victories coming against Camross.

The black and amber, meanwhile, are contesting a fifth final in six years, with Clough-Ballacolla the only other team coming close to that level of consistency.

There are few teams who haven't suffered at the hands of Camross over the years, but Rathdowney-Errill currently hold a 100% record against them in county finals.

The first meeting came in 2010, in what was a low-scoring game, played on a dull, cold day in O'Moore Park. The game started with a bang as Zane Keenan landed a sideline cut from about 80 yards out, but a goal from a free by Brian Campion had Rathdowney-Errill 1-8 to 0-7 up at half time.

A brilliant Niall Holmes goal on the restart got Camross back into it, but Jason 'Giant' Phelan got the telling score six minutes from the end, as his goal sealed a 2-11 to 1-9 victory.

Four years later, Camross had the chance for redemption, but there was only to be more disappointment. Isolating Ross King at full-forward, Rathdowney-Errill caused havoc, and completely dominated the game.

The Leinster Express report at the time noted. “It is not often that Camross are out-worked on the field, but that’s exactly what Rathdowney-Errill did. They matched Camross’ famed work rate early on and then surpassed it, and were full value for their victory.”

Six up at half time, Rathdowney-Errill cantered to victory in the end. The final score, 1-20 to 0-10, represents the biggest Laois SHC final defeat Camross have ever suffered.

Now, after another four years, they are back in the cauldron of a final once more. History is in favour of Rathdowney-Errill, with five of this current side looking to secure a sixth Laois SHC title.

Joe Fitzpatrick, Brian Campion, Shane Dollard, John Purcell and Alan Delaney were all involved in 2006 when they had their breakthrough victory, and twelve years later are still central players for the club's senior team.

For Camross, they too have a few county final veterans in the mix, with Zane Keenan, Malvin Moloney, Tomás Burke, Dean Delaney and Darrell Dooley all survivors from the famous two-game saga with Castletown in 2005.

This is an eighth county final appearance for most of that cohort, as they seek a fourth Laois SHC medal.

For one side, it is a matter of maintaining a winning run, while for Camross, it is another oppotunity to add another side to list of vanquished final opponents.