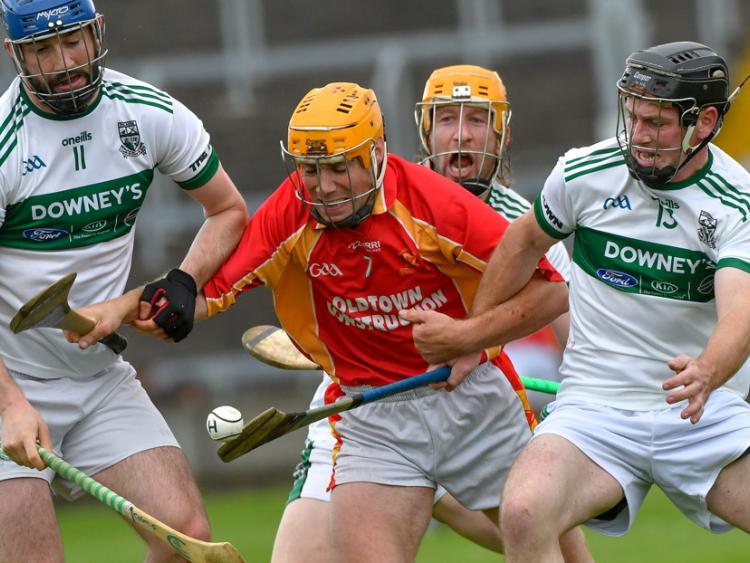 Portlaoise are the Laois SHC 'A' champions after a strong second half display saw them get the better of The Harps in O'Moore Park today.

Having struggled for much of the year, Portlaoise managed to hit form at just the right time, bouncing back from losing their opening two group games by going on a run of four wins on the trot to claim the title.

The game got off to a bright start, as Keith Murphy fired over the opening score in the first minute. The Harps responded moments later through Richie Saunders, and it set the tone for a frenetic and feisty start to the game, which included a couple of rows which broke out in front of the stand.

The Harps took the lead thanks to John Brophy in the seventh minute, but Cormac Rigney landed a free from the right wing to level up the scores.

That was the way of it in the opening quarter, as Cian Taylor edged Portlaoise back in front only for the scores to be quickly leveled again, this time by Eoin Clancy.

The Harps had the benefit of a strong wind at their backs, but they were struggling to make it count on the scoreboard. A wonderful point from the left wing by David O'Mahony saw Portlaoise re-take the lead, but The Harps had their best spell of the game after that.

Michael Lanigan brought them level with a free, and then he was fouled and landed that effort to put them ahead. Ciaran Comerford then kept up their run with a point from close range, and then Conor Brophy made it four on the trot with another effort.

A third Lanigan free made it a four point game for The Harps and they looked like they would kick on to half time, but Portlaoise dug in and worked their way back into it.

They managed to go on a bit of a scoring spree before the break, thanks in the main to the freetaking of Cormac Rigney, as he landed three points in a row to get them back within one.

The last act of the half fell to Conor Deegan however, as he pointed from the right wing to see The Harps hold a slender two-point lead at the interval, 0-9 to 0-7.

The second half took a while to get going, but once the scoring started it was Portlaoise who lead the charge. Brian Mulligan got them started with a wonderful long-range point from the right wing, and Cormac Rigney then landed a super score from the left sideline to level the scores.

Prompted into a response, The Harps re-took the lead moments later as Eoin Clancy split the posts for his second point of the game.

The momentum was tilting towards Portlaoise now though, and they surged ahead in the 40th minute. David O'Mahony slipped away from his marker 21 yards out, held off the challenge of Peter Walsh, and managed to get a shot away, planting the ball into an empty net.

Cian Taylor added a point soon after to push them three ahead, and then they were awarded a penalty, when Padraig Delaney fouled Colm Gleeson in the area. Cian Taylor stepped up to take it, but his powerful effort was brilliantly saved by Peter Walsh, and The Harps scrambled clear. The ball eventually ended up in the hands of Cormac Rigney, who salvaged something from the attack for Portlaoise with a well-taken point.

Michael Lanigan and Rigney then traded pointed frees, and with the game heading into the final quarter, Portlaoise held a four point lead at 1-12 to 0-11.

The Harps, playing into the breeze, were struggling to get anything going in attack, and Portlaoise almost got in for another goal, but again Cian Taylor was denied by Peter Walsh. Cormac Rigney pointed the resulting 65, and the lead was now out to five with ten minutes to go.

Remarkably, there would be no more scores in normal time, as The Harps started going for goals a little too early, and then were left in a situation where they simply had to go for goal with every attack.

They finally got one in injury time, as Michael Lanigan found the net from a 21 yard free, but that proved to be the final act in the game, as Portlaoise ran out two point winners.