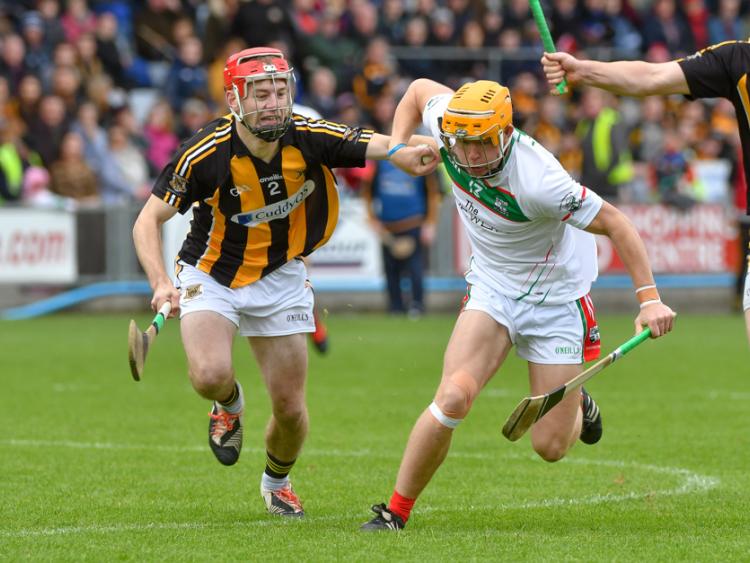 Camross have become the first club to retain the Laois SHC title in fifteen years after they held off the challenge of Rathdowney-Errill to win by two points in O'Moore Park today.

Having lead by eight points at one stage in the second half it looked like it would be a comfortable win for Camross, but Rathdowney-Errill dug deep to set up a nervy finale for the eventual winners. Mark Kavanagh's free-taking kept Rathdowney-Errill in it for long periods, but ultimately they never got over the loss of Shane Dollard and Ross King before half time.

Camross took a while to get going, but once they hit their stride they were much more clinical in attack, with a much more varied spread of scorers too, and deservedly claimed the win.

The game started at a sprightly pace, as Mark Kavanagh fired over the opening point with a little over a minute gone. Zane Keenan responded with a free moments later, and the touchpaper had been lit on the 2018 Laois SHC final.

Dean Delaney edged Camross ahead with a good point from the right wing, but a Kavanagh free soon had Rathdowney-Errill level.

Kavanagh's accuracy from placed balls was to be a recurring theme of the first half, and he added another two minutes later to put his side back in front. His fourth of the game, and third from a free soon followed, as Camross struggled for fluency in attack.

With ten minutes on the clock they won a 21 yard free, and Zane Keenan opted to go for goal, but Noel Brennan got down low to make a good stop, and Rathdowney-Errill repelled the danger.

Ciaran Collier did manage to narrow the gap with a well-taken point, but Kavanagh quickly cancelled it out with a 65. That brought a response from the men in black and amber, as Zane Keenan then pointed a 65, but Rathdowney-Errill responded with interest.

Ross King landed a fine long-range point from play and then a wonderful bit of skill from Paddy McCane saw him create space 35 yards out, and he applied the finish.

Camross, who had a strong wind at their backs in the first half, were never far away though, and Keenan landed two more frees either side of another Kavanagh effort, as the gap remained at two.

With the tension building, a flashpoint on the Camross half-forward line saw the momentum of the game turn. Some wild pulling by Darrell Dooley drew just a yellow card, which he was fortunate to get away with, as Rathdowney-Errill lost Ross King to a facial injury. The also lost Shane Dollard at this juncture as well, as he had been struggling with injury for the previous ten minutes, and the upheaval saw them lose their shape and their focus.

Camross took full advantage, and would end up leading at the break. Martin Burke landed a good long-range point to rally the troops, and then another Keenan free saw them level the scores. With half time almost upon us, a long hopeful ball broke kindly for Eoin Gaughan, and he managed to squeeze a shot over the line for the opening goal of the game.

That score couldn't have been better timed from a Camross point of view, as they lead 1-8 to 0-8 at the break.

Rathdowney-Errill made a bright start to the second half, as Brandon McGinley pointed in the first minute to get them within two. Ciaran Collier soon cancelled that out though, before Mark Kavanagh (free) and Mark Dowling traded points to keep the gap at three.

Rathdowney-Errill were really struggling in attack though, as King's absence appeared to leave them rudderless up front. Camross ploughed ahead, and struck another hammer blow in the 38th minute.

A long ball into the penalty area was superbly fielded by Mark Dowling, and he held off Jimmy Corrigan before shooting low to the bottom right corner.

With Rathdowney-Errill reeling, Camross surged further ahead with points from Mossy Burke and Zane Keenan (free), with the lead now out to eight. Rathdowney-Errill wasted a number of chances from play before Mark Kavanagh landed a couple of frees to keep them within striking distance.

Paddy Purcell then swung over a magnificent effort from distance, and that seemed to stir something in the Rathdowney-Errill support. Lorcan Burke hit back for Camross, but Tadgh Dowling then hit two points in a minute, and Rathdowney-Errill were within four.

They should have gotten closer than that, but tried to get cute from a 21 yard free and ended up losing possession. Soon after, Ciaran Collier bustled his way through for his third point of the game, and Camross were now five up with ten minutes to go.

The onus was on Rathdowney-Errill to launch a comeback, and to their credit that's exactly what they did. It took them a few minutes to get it started, Mark Kavanagh's free from the right wing in the 57th minute got them going.

Tadgh Dowling then made it a three point game with a point from 65 yards out, and then Kavanagh got another free to edge them within two.

Zane Keenan came up with a big score for Camross after that, his first from play, but another Kavanagh free got them within two deep into injury time, but they could get no closer than that, as Camross held on to secure back-to-back Laois SHC titles.