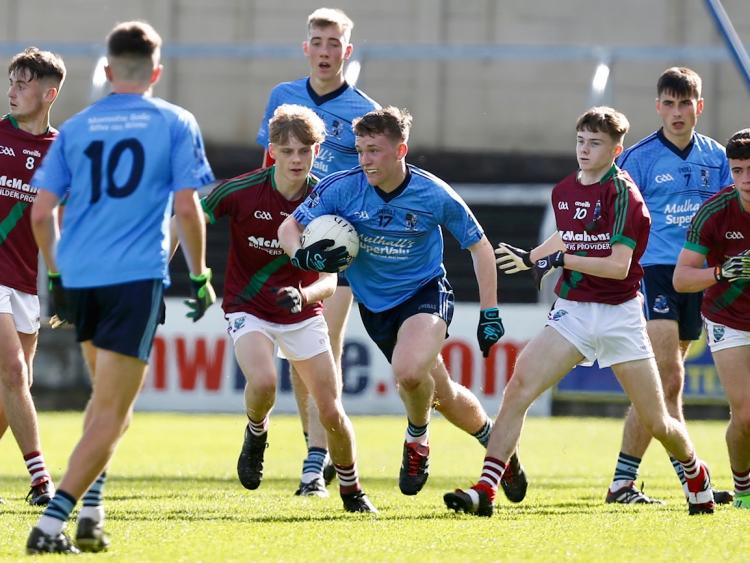 Adam Dunne on the attack for Ballyroan Abbey against Portarlington. Pic: Alf Harvey.

Ballyroan Abbey lead by five with ten minutes to go, and three with normal time up, but Coughlan Maher picked up a loose ball in the penalty area in the 64th minute to slot home the all-important goal.

Portarlington made a bright start, with corner-forward Ciaran Ward slotting over a free with a little over a minute gone. Things quickly got better for them, as they won a penalty a minute later, which Ward stepped up to take.

He shot low to the bottom left corner, and Ballyroan Abbey 'keeper Patrick Mulligan managed to get a hand to it, but it hit post and went in for the opening goal of the game.

Ballyroan were struggling to get anything going in attack, but finally sprung to life in the eighth minute with Enda McWey and Dylan Cuddy pointing within seconds of each other to halve the deficit.

Portarlington responded by doing likewise, as Sean Michael Corcoran (free) and PJ Ward both hit the target in the space of a minute to restore their four point advantage.

That set the tone for the ebb and flow of much of the first half, as again Ballyroan Abbey made inroads into the Port lead. Brian Whelan landed a couple of frees to get them within two, but another PJ Ward point kept the goal between the sides.

Things then took a downward turn for Portarlington as centre-back Darragh Galvin was shown a red-card. James McWey then curled over a free to narrow the gap to two, but a Sean Michael Corcoran free settled Port back down.

They couldn't enjoy equilibrium for too long though, as Ballyroan Abbey drew themselves level in the 27th minute when Eoin Egan raced clear on goal before calmly slotting to the bottom corner.

Portarlington were reeling after that, but the managed to lead going in at half time when Ciaran Ward tapped over a free, leaving them 1-6 to 1-5 to the good.

Ballyroan Abbey almost made a spectacular start to the second half when Davin McEvoy, introduced as a sub at the break, saw the ball break to him in the penalty area. He shot first time, but saw the ball strike the crossbar and bounce away from goal. Moments later, McEvoy landed a nice point from the left wing to level the scores.

Ballyroan were playing with more confidence now, and Davin McEvoy was proving a real threat since his introduction. To highlight that, he got on the end of a Brian Whelan pass to fire a rocket of a shot into the top corner, as Ballyroan Abbey took the lead for the first time.

Port hit back with a point from Aaron Coss, but Ballyroan Abbey were enjoying their best spell of the game and hit back with two James McWey frees and another effort from Davin McEvoy.

That left them five clear and they looked to be cruising, but Portarlington came roaring back. A brilliant pass saw Rioghan Murphy sent clear on goal, and he was hauled down by Eamonn Fitzpatrick for another Port penalty. Ciaran Ward stepped up, and his crisp effort gave Patrick Mulligan no chance.

The crowd was in full voice now and it looked like the momentum was about to shift, but Ballyroan Abbey came up with some big scores through Davin McEvoy and Shaun Fitzpatrick to go four ahead with four minutes left.

Sean Michael Corcoran then curled over a free before Coughlan Murphy came up with his vital late intervention to send the game to replay.