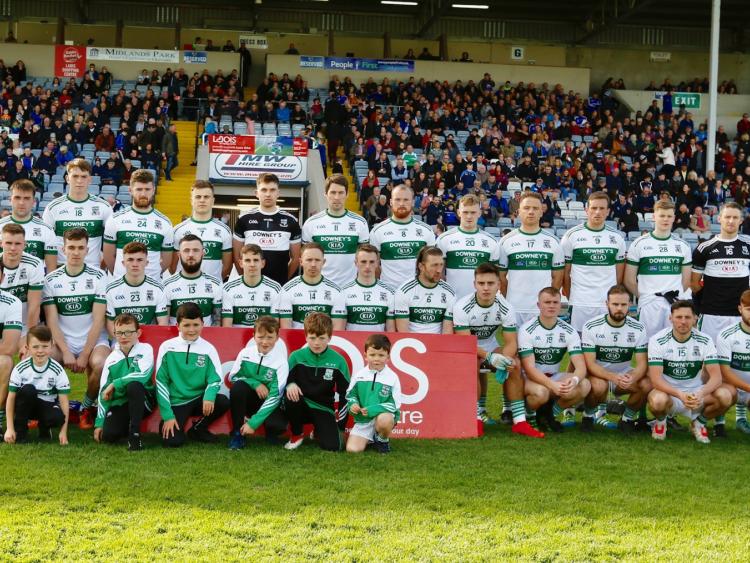 Malachy McNulty's charges made it 11 titles in 12 years, and despite the six point margin, they were made to battle all the way by a well-drilled and competitive O'Dempsey's side. There was only three points between the sides at half time, but a scoring spree from Portlaoise midway through the second half ultimately won them the game.

Portlaoise got off to the better start, as was expected, with Craig Rogers tapping over a free and Ricky Maher adding another from play. O'Dempsey's took a little while to settle, but finally got on the scoreboard thanks to a Matthew Finlay free in the sixth minute.

A good team move involving Shane Nerney and Tom Kelly saw them set up Mark Barry for the equaliser, and then Matthew Finlay nailed a long-range free to see O'Dempsey's into the lead for the first time.

They should have pushed further ahead in the tenth minute when Matthew Finlay wheeled away from David Holland and found himself one-on-one with Graham Brody, but his shot hit the Portlaoise 'keeper in the face and bounced away to safety.

Portlaoise made the most of the let off, as Paul Cahillane drew them level, and then a long-range shot from Craig Rogers put them into the lead. Colin Finn then had a goal chance saved, before Conor Boyle pointed twice in a minute to push them three clear.

With momentum building, Portlaoise then struck for the opening goal as Ricky Maher ran through on goal, held off his marker and unleashed a soccer-style shot to the bottom corner. Gareth Dillon quickly added a point, and Portlaoise were seven clear and cruising.

Many teams would have buckled at this stage, but O'Dempsey's came back surperbly. Míchael Finlay pointed either side of a Mark Barry free to see them hit three in a row, and even though Paul Cahillane broke that run with a free, O'Demspey's were on a charge.

Brilliant play from Mark Barry saw him cut in from the left wing, hold off his marker and play a pass across goal which was palmed to the net by Dan McCormack.

Barry Kelly then added a point and rapturous O'Dempsey's support roared on their approval. They were just one point behind now, but Portlaoise hit two frees before the interval, both from Paul Cahillane, to lead 1-10 to 1-7 at the break.

The second half started out a much cagier affair, with scores few and far between in the opening minutes. Paul Cahillane managed to twist and turn away from Shane Nerney in the 34th minute to squeeze a shot over the bar, and that was the only score of the opening ten minutes.

Things quickly picked up after that, however, as Portlaoise got their second goal. Paul Cahillane won the ball on the left wing and played the ball into space in front of goal for Ricky Maher, whose initial attempt to fist the ball past Padraig Bannon dropped short. He followed it up, however, goaling on his third attempt after the second hit the crossbar.

Kieran Lillis added a point moments later, and Portlaoise were now eight clear, their biggest lead of the game. That lead kept growing too, as Graham Brody (free) and Conor Boyle sent them ten clear, and it was up to O'Dempsey's now to come up with a response.

They were unlucky not to hit back with a goal, as Míchael Finlay palmed the ball over Graham Brody, and it looked to be heading in, only for it to hit the crossbar and bounce away. O'Dempsey's won the loose ball and Matthew Finlay pointed.

It all seemed academic even at that stage, but O'Dempsey's hadn't gotten this far without character, and they showed plenty of it once more. Finlay added another free before a fine score from Barry Kelly was bettered by a stunning long-range effort from Conor Meredith, and they were now back to within six.

Ricky Maher and Mark Barry traded pointed frees to keep that six point gap between the teams with three minutes of normal time still to go.

Unfortunately for O'Dempsey's they couldn't get any closer than that, as Matthew Finlay and Conor Dunphy traded late points to see the reigning champions retain their title.