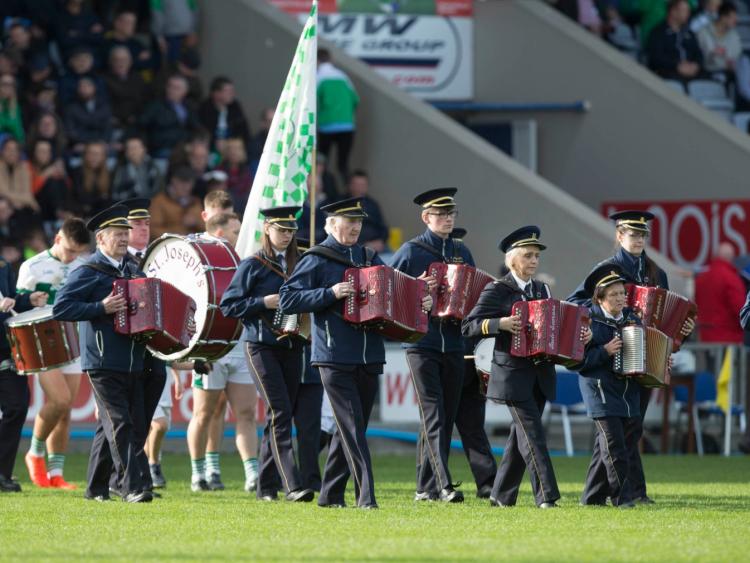 The teams being lead around by the Portlaoise Accordian Band on Sunday. Pic: Alf Harvey.

Club football in Laois is over for another year, and with the season now at an end, we take a look back to hand out some awards.

A brilliantly consistent season at centre-forward for Portlaoise, a position which no doubt didn't come naturally to him. A huge work rate which saw him pop up all over the field, and he still managed to chip in with 1-11 from play over the course of their five games.

Like so many of the Portlaoise team, the timing of his interventions were so important, whether it was coming up with a score or tracking back to make a dispossession, something which was in evidence against St Joseph's in the semi-final.

It can be hard to pick out one particular Portlaoise player for praise, such is the strength of their collective, but Boyle was excellent from start to finish in 2018.

At just 21 years of age, Matthew Finlay terrorised defences throughout the SFC this year, and was the top scorer in the competition, 12 points ahead of his nearest rival.

Excellent movement, ability to kick off either foot and plenty of pace too. This was the year he announced himself as a force at senior level. Kudos also to Gary Saunders and Mark Barry.

He may have missed the final, but he had done enough before that to get Portlaoise to the decider once again. To see him almost single-handedly beat Graiguecullen in a devastating ten minute spell before half time in that game was a sight to behold.

At 37 he's showing no signs of slowing down, and no doubt he'll back back in the thick of things once again next year.

A corker of a game between the two local rivals, it had been set up nicely by Graiguecullen's comeback in the first game to force a draw.

The replay had everything, with a penalty, an OG and a Goal of the Season contender coming in the first half alone. There were some brilliant scores, old lads playing well, young lads playing well, and the scoreline was close all the way through. A good, proper championship game.

Highlight of the Championship

It was exciting to see a young, attack-minded side like O'Dempsey's really have a crack at the championship this year.

They were tremendous fun to watch, got some great scores, and have enough about them to improve in the years ahead, if they are prepared to put in the work. Seven of their starting team in the final were aged 21 or under, so there is clearly scope for improvement.

Lowlight of the Championship

Once again, there were teams struggling to stay relevant in the competition, and something concrete will eventually have to be done about the numbers in the SFC.

Two of the three Gaels teams ended up in the relegation playoffs, while the other only barely avoided them. There is too much short-term thinking and not enough long-term thinking when it comes to the Laois SFC, and clubs need to be realistic about their future.