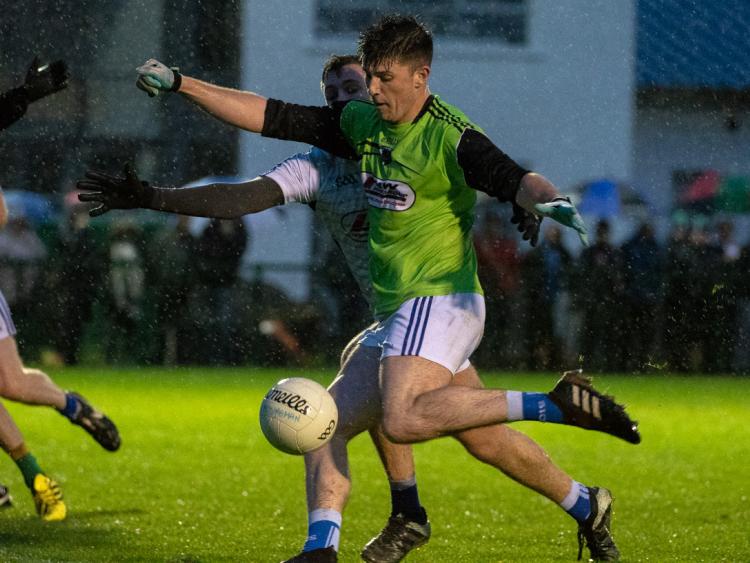 Brian Daly about to shoot at goal on Saturday night. Pic: Denis Byrne.

On paper, the first of John Sugrue’s divisional matches between East Central and Northwest looked a bit of a mismatch, and that’s the way it panned out, as East Central incurred no difficulty in beating West Northwest.

East Central had the better of the early possession, but failed to make it count, as they struck a number of sloppy wides in the dreadful conditions. This allowed Northwest to take a surprising early lead, as centre forward James Moore sailed the first two points between the posts.

East Cental began to settle in front of the sticks shortly after though, scoring the next three points to swing the tide in their favour. Ruairi O’Connor knocked over the first from a free, before some good play from Jody Dillon resulted in wing back Aaron Carroll drawing the game. Brian Daly then played a nice one-two with Diarmuid Whelan to give his side the lead.

Sean Moore got Northwest back on level terms, but they were second best for the remainder of the match. The first goal of this new format was scored by Stradbally native Jody Dillon, as a neat give and go with Michael Keogh put him through on goal, and he made no mistake with the finish.

Michael Keogh then went from provider to goalscorer, as he showcased blistering pace that was matched with a low finish to get East Central’s second goal. He followed that up with a point, before Niall Mullen got one back for Northwest. Ruairi O’Connor and John Rogers kept East Cental on top as we approached the half-time whistle.

Colm Coss and Diarmuid Whelan (free) swapped points before the break, as East Central led on a score line of 2-7 to 0-5.

As expected, Northwest changed things up at half-time, introducing Joey Shelley along with a new and youthful midfield duo of Eoin Dunne and Robert Tyrell.

Northwest began the second half like they began the first, brightly. Sean Moore scored the first of the half, before hard running from Fiachra Fennell allowed Niall Mullen to curl over.

Northwest were running harder at the East Central team in the new half, and that was causing them problems. Good build up play meant Niall Mullen could release Robert Tyrell through on goal, but he missed the chance.

Brian Daly was showcasing all sorts of abilities at midfield, and his carrying of the ball allowed Diarmuid Whelan a tap over point. A good ball from Ruairi O’Connor gave Padraig Dunne the opportunity to get on the scoresheet, and he obliged, as East Central brought the gap back up to eight.

Niall Mullen kept Northwest in the game with his third of the evening, but East Central kicked the next three points to assure victory. It was St Joseph’s duo Brian Daly and Michael Keogh who found the target. Another St Joseph’s man, Mikie Dempsey, scored East Central’s last of the match, as they ran out 2-13 to 0-11 winners.