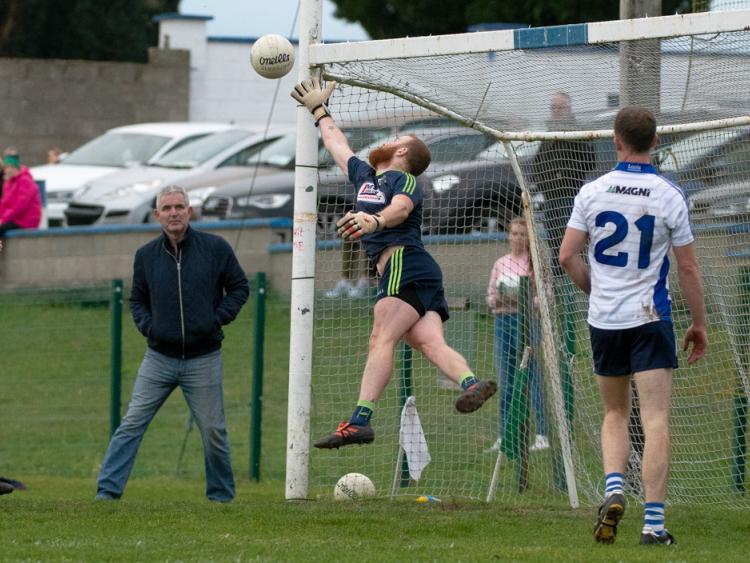 A rampant second half display from the North East selection saw them run out comfortable winners in the end of this Laois Divisional Trial Tournament clash in Mountmellick on Saturday.

With both of these teams having lost their opening round games, it was a chance to get some momentum heading into the final round of matches, and it was the North East side who took that chance.

While the final scoreline was one-sided, it had been a good, close competitive game for 40 minutes, until the North East side moved through the gears. Colm Murphy and Evin Keane were superb in their full-forward line, while Finbarr Crowley showed an impressive eye for a score, landing 0-5 from play.

The North East team are still hoping to welcome back a few O’Dempsey’s players for the final game, although Rory Bracken did line out here as he will be out of the country for the next game. He did well too, as did a number of other players on both of these teams, with plenty to ponder for John Sugrue and his management team.

Colm Murphy was one of those to impress, and he opened the scoring in the second minute. James Moore responded for West Northwest with a point from the left wing, but Murphy quickly responded for North East.

A Moore free tied the scores once more, before Murphy made it three points in the opening eight minutes with a free. Evin Keane then had a great chance to push North East further ahead when he had a shot from close range moments later, but Marcus Redmond made a brilliant, last-ditch block to deny him.

Colm Murphy then had a goal chance saved before Keane opened his account with a point in the 16th minute, and Finbarr Crowley soon added to that seconds after coming in as a sub. Another point from Colm Murphy made it a four point game, with Crowley and James Moore (free) trading points after that.

The West Northwest selection needed to get something going themselves, and it was Joey Shelly who provided the inspiration with two superb points in quick succession. Colm Murphy hit back for North East, but then a Moore free and good point under pressure from James Mullaney had the West Northwest team back within one.

North East finished out the half that bit stronger though, as Evan Costello pointed from the right wing and Finbarr Crowley added two more to see them lead 0-11 to 0-7 at the break.

West Northwest quickly ate into that lead though when play resumed, and again it was Joe Shelly who was central to it. He pointed in the opening minute of the half, before showing brilliant pace to cut in from the right wing and get a shot at goal. His initial effort was saved by Niall Gorman, but Shelly followed up on the rebound to level the scores.

Colm Murphy was again the one to hit back for North East, but another James Moore free kept the scores level.

It was only now that the North East side started to assert some dominance on the game, as Shane Murphy and Finbarr Crowley pointed before Evin Keane hit a brace and Colm Murphy palmed the ball to the net for their first goal.

The floodgates opened to an extent after that, with Murphy and Keane to the fore. Keane for the second North East goal in the 46th minute, slamming home a loose ball from close range, and it was a relatively fuss-free run to the final whistle from there.

They will not play East Central in their final game next week, while West Northwest will finish up with a game against South East.

COLM MURPHY: The Portarlington sharpshooter was back to his best after a summer in the USA. He scored 1-8, with 1-6 of it coming from play, and was a threat from start to finish. Could have scored even more and will push hard for a spot on the panel on this form

EVIN KEANE: Followed up on an impressive display in the first round of games with another eye-catching performance. Constantly moving and trying to provide an option for those further out the field, he will have put himself firmly in the thoughts of the Laois management team

RORY BRACKEN: A solid performance at midfield, just a week after losing a county final. There was a good midfield battle in this game, and he was the best of the four on show.

EOIN KEOGH: He hasn't really had a chance to show his talents at senior level for Laois with Graham Brody playing so well, but he was outstanding in this game on Saturday. Made a string of stunning saves and his kickouts were spot on as well.

JOEY SHELLY: The Rosenallis flyer was their best forward, scoring 1-3 from play. More than that though, he had a real appetite to work and make tackles, which he showcased by sprinting 50 yards after a North East player in the second half to dispossess him in midfield.

ROB TYRELL: A tough evening for the Camross man but games like this will stand to him. Bags of potential and finished the game with a nice point.