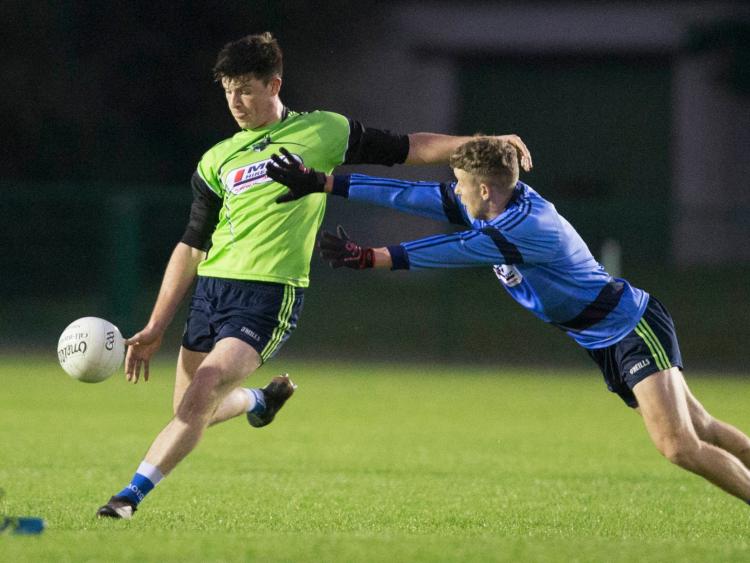 It was a Paul Kingston special last Saturday evening in Stradbally, as every time he got his hands on the ball a white flag would follow seconds later. Despite his masterclass performance, both sides were well matched up until the last ten minutes, where South East pulled away.

South East raced into an early four point advantage, as East Central’s struggled to get to grips with their shooting. Evan Lowry kicked the opening score, before David Conway fisted over South East’s second. Crettyard’s Michael Nash opened his account for the evening, before David Conway slotted over his second.

East Central’s poor shooting finally came to an end when wing back James Kelly put over their first, and the men wearing green struck for a goal straight after to get back on level terms. Midfielder Brian Daly played a nice ball into Diarmuid Whelan, who spun past his man and finished calmly past Darragh Phelan.

Paul Kingston put South East back in front, but some well-worked build up resulted in Colm Begley swinging over a reply. Kingston would go on to land four more points for South East, as his ability shone up front. However, Diarmuid Whelan also looked in fine form, as he kicked on from his goal to fire over three points to his name. Colm Begley also showed his experience with a further two scores from midfield.

However, South East finished the half like they started it, as Stephen Attride found the target after a bursting run, and Michael Nash kicking his second. This left South East one to the good at the break on a score line of 0-11 to 1-7, and it was all set up for an end-to-end second period.

Michael Keogh broke clear of the tackle on the resumption to manufacture a goal opportunity, but his shot was straight into the arms of Derek Beale. However, they did get their goal, as quick hands from Diarmuid Whelan and Michael Keogh resulted in Mikie Dempsey finding the back of the net.

Justin Lalor gave East Central a three point advantage, before Paul Kingston managed to raise a white flag from a very difficult angle. Padraig Dunne restored the advantage for East Central, before Michael Keogh weaved his way past more challenges, but he could only find the side netting.

It didn’t matter whether he had the ball from play or from frees, Kingston had one of them nights where he just could not miss. He reduced the gap to the minimum with two scores, but Padraig Dunne replied for East Central.

However, East Central would only manage one more point, as South East dominated the remainder of the affair. Kingston converted a free, before striking another lovely point off his left. Begley scored East Central’s last of the match, as they began to fatigue.

David Conway pointed twice in quick succession, with his second being handed to him after good play from Graiguecullen duo Aaron Forbes and Brian Byrne. East Central did have a goal chance after that, and if Seamus Lacey had converted, they would’ve been back in the driving seat. However, Darragh Phelan made a brilliant stop to deny.

Paul Kingston, Evan Lowry and Brian Byrne rounded off the win for South East, as they confirmed a final spot.

Shane Bolger: The Killeshin man enjoyed a fine season with both the Laois U-20’s and his own club, and is well able to handle himself physically at the top level.

Aaron Forbes: Didn’t have as much an impact in this one as he did the first night, but his powerful running is a sight to behold and he has plenty of potential to improve.

Evan Lowry: Like club mate Bolger, Evan Lowry has had a very good season, so don’t be surprised if there is another Lowry on the Laois panel this season.

Justin Lalor: ‘Cookie’ only broke into the Stradbally first team this year, but he was very solid in all their championship outings, and is someone who seems to always make the right choice when he gets the ball.

Brian Daly: Daly might feel a bit hard done by not being selected for the Laois panel last season, but it looks a given that he’ll make it this year, and he’s put in two solid shifts in.

Adam Campion: The St Joseph’s man only came on as a substitute in this contest, but he was gritty when he came on, and this corner back could be a positive addition to the set up this year.