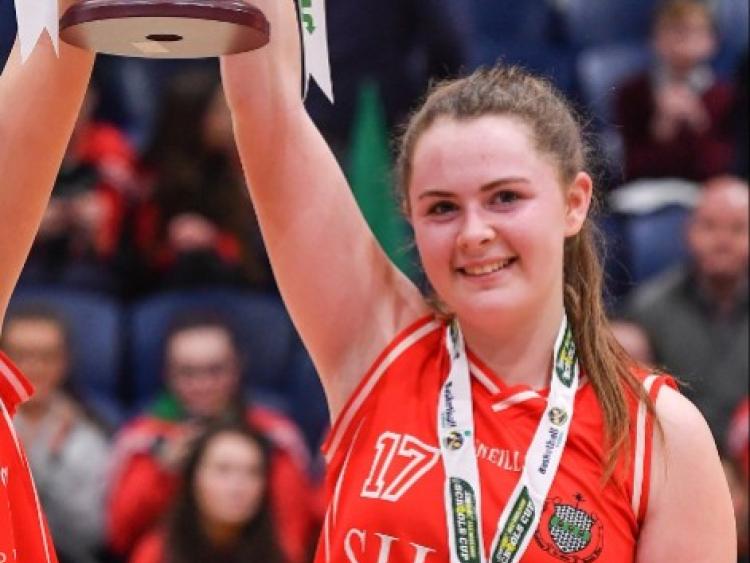 Sarah Fleming showed incredible commitment to both teams on Sunday.

Sarah's incredible schedule arose after the Laois minor camogie final was directed to go ahead this morning (Sunday) in Ballacolla at 12pm, despite both teams agreeing to a postponement. This resulted in a fixture clash for six Portlaoise camogie players, who were also involved with the Portlaoise Panthers basketball team in a National Cup qualifying tournament in Dublin.

Incredibly, Sarah opted to play in both competitions, but went through a hectic schedule in order to make all three games.

At 10am this morning she lined out at shooting guard with the Portlaoise Panthers against DCU Mercy in the semi-final of the National U-18 Qualifying Tournament, held in St Fintan's High School, Dublin. Panthers went on to win that game and qualify for the final later in the afternoon.

She left the semi-final at half time, and her mother Irene drove her straight to Ballacolla, where she then lined out at full-back with Portlaoise in the county final against St Brigid's. Sarah also plays full-back for the Laois minor camogie team. Portlaoise lost out to St Brigid's in what was eventually a one-sided final.

After that game, she then travelled with team-mate and fellow basketballer Grainne Reilly back to St Fintan's High School to play in the final of the tournament against St Mary's Castleisland.

Panthers lost that game, but by making the final they had already qualified for the quarter-finals of the national cup, where they now face an away game against Liffey Celtics from Leixlip.

Overall, just to attend the games, Sarah travelled roughly 350km, and it would have been a little over 450km by the time she got home from the basketball.

She also played in three basketball games on Saturday with the Panthers, which saw them qualify for the games on Sunday.