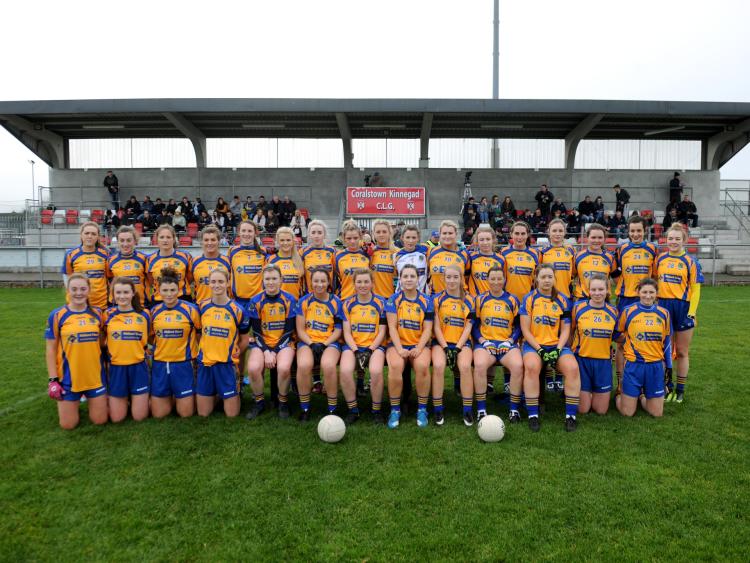 The Sarsfields team which lost out on Sunday. Pic: John McAuley.

Sarsfields hopes of Leinster Club SFC glory were dashed on Sunday in Kinnegad, as reigning champions Foxrock-Cabinteely picked up their fourth provincial title in a row.

That run has seen them defeat Sarsfields in each of those campaigns, and once again the Laois champions got little reward for a battling, competitive performance. The final scoreline tells the story of a one-sided game, but it doesn't do justice to a massive effort from Sarsfields.

Despite that, the Dublin side were worthy winners, with their pace and movement a joy to behold, while Sinead McGoldrick was in sensational form for the Dubs. With her rampaging forward and Ciara O'Riordan sweeping up and loose scraps in their defence, it left Sarsfields with too many threats to snuff out.

While the season ends in disappointment for Sarsfields, it has still been a very productive 2018, as they retained the Laois SFC title, reached a provincial final and won the Crossmaglen 7s.

Foxrock-Cabinteely served notice of their intent early on, and it came from a familiar source to Sarsfields. Laois intercounty player Laura Nerney, who is based in Dublin, got through on goal in the opening minute but was denied by Ciara O'Loughlin.

While Sarsfields survived that, the Foxrock-Cabinteely onslaught was only beginning, and they quickly opened up a lead. Tarah O'Sullivan kicked the first of the day, and Amy Ring then slotted over two frees before Hannah O'Neill pushed them four clear.
Foxrock-Cabinteely were pressuring the Sarsfields kickouts and reaping the rewards, as O'Sullivan got another point before Sarsfields started to assert themselves.

The excellent Clare Conlon curled over a free off her trusty left foot, and she then added another from play to breathe some life inter her side. They pushed on now and Conlon set Ciara Burke up for another point to get them within two.

Foxrock then responded with a hammer-blow when they got their first goal, as Amy Ring slotted home a penalty. Sarsfields were wobbling now but they refused to buckle, and quickly got themselves back into the game.

Clare Conlon and Mary Keating swapped passes before setting up Ciara Burke for a well-worked goal. Both teams traded points before the break, and Sarsfields were only two down at the break, 1-6 to 1-4.

Following a cagey start to the second half, with Clare Conlon pointing twice for Sarsfields and Foxrock-Cabinteely hitting back with a couple of points themselves to keep two points between the sides.

The turning point came with Sarsfields were down to fourteen players after Alison McEvoy was sent to the sin-bin, and that allowed the slick-moving Foxrock side more room to manouevre.

They made use of it with a goal from Roisin McGovern, although another point from Conlon got Sarsfields back to within four.
Unfortunately for the Laois women, that was as close as it would get. Ciara Ní Mhurchadh rattled home a third goal for the Dublin side midway through the half, and with Sarsfields tiring, they pulled further ahead in the closing stages.

McGovern got her second goal and points followed from Fiona Claffey and Amy Connolly as Foxrock-Cabinteely settled the game in their favour, with Grainne Lalor managing a late response for Sarsfields.