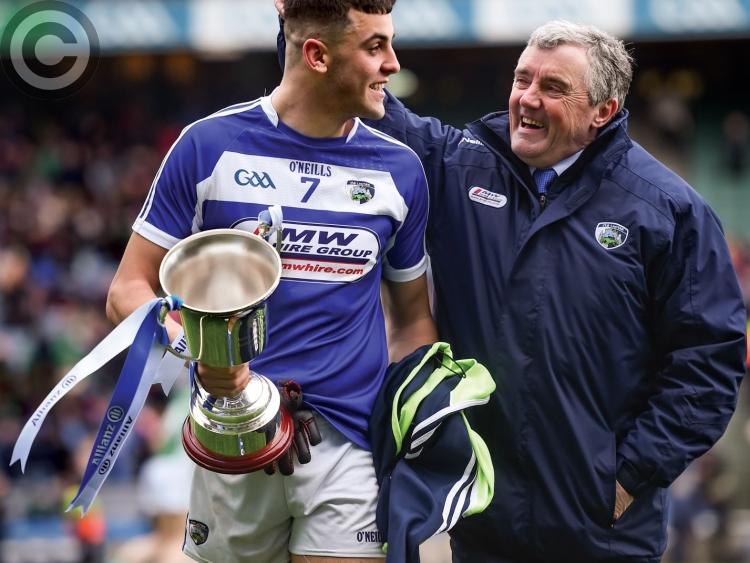 'Official seal of approval' is the name of a picture that highlights the upturn Laois Gaelic Football fortunes following promotion and a win over Carlow in the National Football League Division Four final.

Laois wing back Robert Pigott, from Portarlington, is captured by David Fitzgerald of Sportsfile, holding the cup and getting a congratulatory pat from Laois GAA football board chairman Lawrence Phelan for a job well done.

Hurler of The Year and Limerick All-Ireland winner Cian Lynch stars on the cover of the ‘A Season of Sundays’.

The 156-page hardback book has more than 275 images of the 2018 Gaelic Games year from the talented team of Sportsfile photographers, with text by Alan Milton from the GAA.

Speaking at the launch, the book’s creator Ray McManus said: “The GAA season never fails to deliver and once again I am proud of the collection my team at Sportsfile has assembled. Across all codes and competitions, we have captured some truly remarkable moments and it is a privilege to unveil them in our book each year.”

Uacharán Chumann Lúthchleas Gael John Horan said: “The eagerly anticipated annual publication of 'A Season of Sundays' heralds the onset of winter and the concluding stages of another hectic year of football and hurling activity. Its reputation precedes it and that's what it has become a much sought-after inclusion in the collection of so many people who follow our games. Everyone will have their favourites in this year's offering and the green hue throughout will sit well with Limerick and neutral hurling followers alike. Similarly, the incredible images that accompany Dublin's march to a fourth consecutive crown will be treasured in the capital.

"I heartily congratulate Ray and the Sportsfile team who never fail to reach the high standards they have set for themselves. It's a yearly image-driven treasure trove and I am delighted as GAA President to welcome its arrival on the shelves as another memorable year starts to wind down.”

John Comerford of the book’s sponsors Carroll’s of Tullamore added: “We are delighted once again to sponsor ‘A Season of Sundays’. Each year the publication serves up a feast for the eyes and this year is no different. The book has captured a wonderful selection of images that bring the GAA season to life in a unique and inspiring way.

"We are proud of our long-standing partnership with ‘A Season of Sundays’. We have deep roots in GAA as proud sponsors of the Offaly teams for over 25 years now, this publication is an extension of our connection to the GAA community across the country. I wish to congratulate Ray and his talented team on another fantastic edition looking back on what really was a captivating season of GAA.”

It would make the perfect Christmas gift for any GAA fan, retailing at €24.95 from bookstores nationwide and online at www.sportsfile.com.