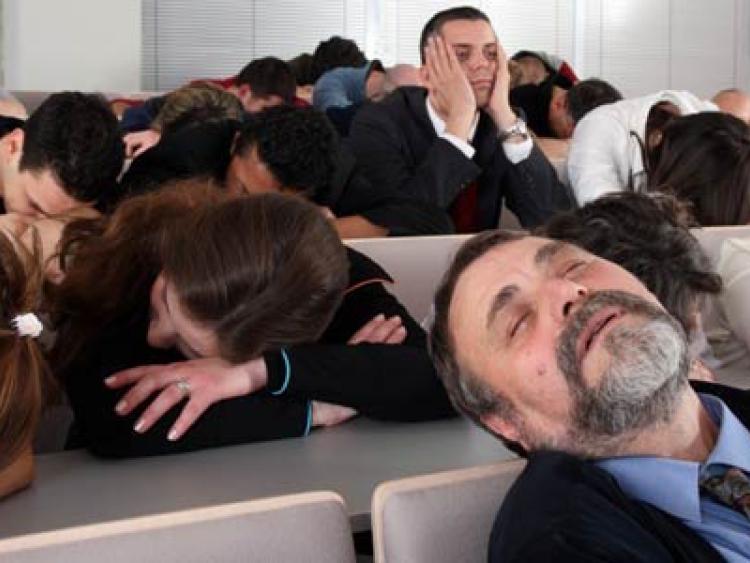 We are now heading into a truly magical time of year. The night's are drawing in, there is a palpable air of excitement in communities around the county, the decorations are up, and people are making plans for their big annual get-together. Yep, it's AGM season alright, no doubt about it. Also, and less importantly, Christmas also happens at this time of year.

AGM's and conventions can be fraught with danger (we know this from experience - Ed) so it's best to stick to the script. We're here to help.

'Did no one come down early and turn on the heat? Ah for fu...' - usually your opening gambit when you walk into a room that's colder than a gravedigger's boots.

'Right lads, will we get started' - an early prompt, because lads have been drinking tae and talking dung for the last forty minutes, and it's about time the meeting got going.

'Mister Chairman' - standard moniker for the chairman, even if you know his real name.

'Through the chair' - An appeal for an opportunity to say something, which you will go ahead and say anyway, regardless of whether the chairperson gives you permission or not.

'Performances on the field were a little disappointing' - usually found in the secretary's report. Translation - 'we were stone useless this year, but I can't word it that way in the report'.

'Any questions on the treasurer's report?' - usually there aren't, because most people can't decipher it. It might as well be in hieroglyphics.

'I haven't much more to add' - This won't stop the person rehashing what has already been said, and they will proceed to speak for, roughly, the length of a Palm Sunday mass.

'It's an onerous task' - almost always the description used to describe selling tickets for the club lotto.

'It would be remiss of me not to mention...' - A great way for a lad who loves listening to himself extending his moment in the spotlight.

'I'd like to second that as well' - there's always one stook who says it.

'Look lads, someone is going to have to do it' - late in the election of officers, everyone has their arms folded, and no one wants to be PRO.

'If it's alright with ye, we'll get someone for that position and confirm it before the first committee meeting' - this is a nefarious move, which usually results in someone who is not even at the AGM having their name put down for a job. Usually PRO.

'I don't know, I'm not on that Bookface or any of them social medias' - Usually uttered by some oul fella in the club when he's giving out that he's not getting word about when the matches are on.

'I'll have to come back to you on that' - You got so bored you drifted off and only came around when you heard someone say your name. You have no clue what is being talked about.

'I want him to withdraw that remark' - Things are getting feisty.

'Hold on now, I didn't cut across you' - voices are being raised, it's getting personal now.

'Come on now lads, a bit of respect here please' - The chairperson is appealing (in vain) for calm.

'Ah lads, leave it so, we'll be here all night' - An exasperated club member trying, as politely as he can, to get the people giving out to shut the hell up so everyone can go home.

'We'd like to thank the ladies committee for the tea and sangwiches' - because men couldn't be expected to make tea and sandwiches on this scale, they'd be curled up in the foetal position in a corner before they had managed to open a packet of ham.

'Where's the sheet with the Votes of Sympathy?' - nearly there now, on the home straight.

'Have we anything for Any Other Business?' - the tension at this point is unbearable. If someone speaks up now, you'll be there for another hour. If everyone keeps their mouth shut, you'll be home in five minutes.

'Yeah I have. Can someone explain to me how we paid that chancer €100 a night, and we still weren't fit to put the ball over the bar from 30 yards out?' - Your dreams of an early conclusion are over.

Read also:  LAOIS LINGO - Your guide to shouting and roaring at GAA matches in Laois