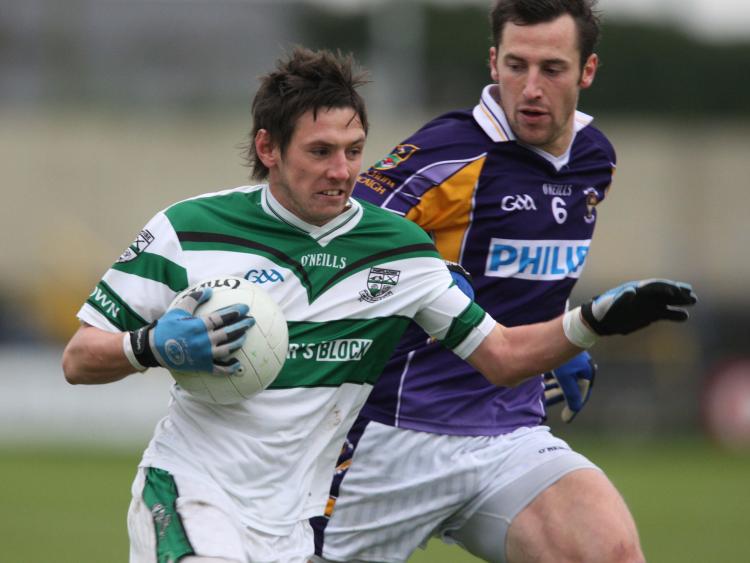 Craig Rogers in action against Kilmacud Crokes when they last met in 2010. Pic: Alf Harvey.

Portlaoise will put their Leinster club SFC credentials on the line this Sunday afternoon, as they head to Parnell Park to take on Dublin champions Kilmacud Crokes.

So often for Portlaoise their hopes of provincial glory have been scuppered by the champions from the capital, and once again they must negotiate a way past a Dublin side.

Their recent record is one of woe, with losses to St Vincents, Ballyboden St Enda's, St Brigid's and Ballymun all coming within the last decade.

Motivational material then will not be in short supply, but there is no doubting this will be the toughest game they have played this year. Kilmacud were worthy winners in Dublin and breezed past St Peter's of Dunboyne last time out, with Paul Mannion in the form of his life at the moment.

After hitting 1-6 in the Dublin final, he followed it up with 2-6 against Dunboyne, before being taken off early to keep him in top order for this weekend. So impressive are the Dublin side, they could even beat the Meath champions without Cian O'Sullivan, as the Dublin full-back was left in reserve having flown back from his stag in Spain for the game.

Portlaoise met Kilmacud back in the 2010 Leinster Club SFC, losing by three points to a team lead by Longford's Bryan Kavanagh.

Kilmacud have undergone a huge overhaul since then, with only three of their All-Ireland winning side from 2009 still involved, and only around five of the side from that 2010 game with Portlaoise still lacing up their boots.

That overhaul hasn't weakened them, with Mannion and O'Sullivan supplemented by former Dublin footballers Craig Dias and Pat Burke in the starting team. They have strength in reserve too, with the infamous Mark Vaughan still togging out, and former AFL player and Armagh footballer Kevin Dyas also offering an option off the bench in their last two games.

Portlaoise have to figure out how they are going to curb Mannion, who is the totemic figure around which their attack operates. If he lines out at centre-forward, he will be in direct opposition with Cahir Healy, which should be an interesting battle.

Another option available to Malachy McNulty is to put Gareth Dillon on the Kilmacud man, with Dillon having done an outstanding job of nullifying Mannion in the Leinster final earlier this year.

Portlaoise generally have a lot of faith in their players to pick up whoever lines out next to them, and dropping Dillon back would take him out of the mix in an attacking sense. He is a vital cog in that aspect of Portlaoise's play, popping up with his fair share of scores and using his pace to get them up the field quickly. Is it worth losing that element of his game to try keep Mannion on the periphery? That's the question Malachy McNulty and Co will have to answer for themselves.

Seven of this Portlaoise team played in the 2010 meeting between these sides, on a day when Portlaoise scored just 2-4 and never really showed what they could do.

Last time out, against Moorefield, Portlaoise had a point to prove and they turned in one of their best provincial performances for some time. That was a good win, but the standard bearers in Leinster are generally the Dublin champions, so Portlaoise have to prove themselves all over again.

Kilmacud are, naturally enough, the odds on favourites (1/3) but playing in Parnell Park won't faze Portlaoise, and being underdogs won't bother them too much either.

This Portlaoise team have plenty of unfinished business in Leinster, and the hurdle which has repeatedly tripped them up is the Dublin champions.

And now, once again, a Dublin team stands between them and their dreams of a Leinster title. The problem remains the same, butwe will have to wait and see if they can finally solve it.