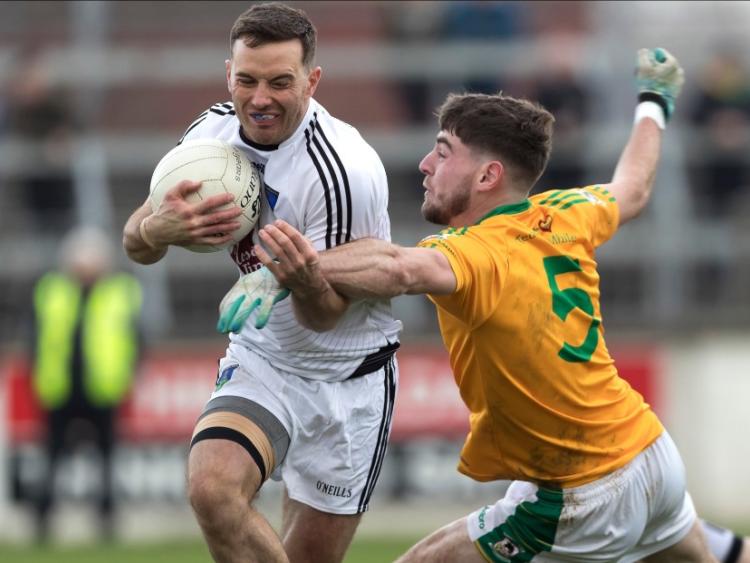 Courtwood have had an exceptional season, claiming Intermediate silverware with one of the youngest squads in Laois and upsetting St Mochtas of Louth in their own back yard, but Kildare’s Two Mile House proved a bridge too far for Eddie Kinsella’s men on Saturday.

Two Mile House played with the aid of the breeze in the first half, and began like a train, hitting the first four scores. Kildare county man Chris Healy opened the scoring, with former All-Star Peter Kelly slotting over the second, and the in-form Aidan Casey adding another two.

Courtwood finally got up and running through full forward Alan Kinsella, but Aidan Casey landed another free to keep Two Mile House’s solid start intact. Cian Doyle, who earned a starting place after a string of excellent performances off the bench, kicked Courtwood’s second.

Casey’s free-taking ability was a thing of beauty to watch all day, and he added his fourth of the first half. Kinsella responded for Courtwood down the other end, showcasing his deadly turn of pace. Casey replied with a free, before Niall Dunne fired over after he ran nearly half the length of the field.

However, Casey was firing on all cylinders, as he knocked over two frees in between a Chris Healy point, before Casey struck for the first of his two goals. Jack Collins read Matthew Byron’s kick-out, and kicked it to Casey who was in acres of space. The corner forward made no mistake with the finish, slamming it past Byron.

Casey and Caomhan Doolin finished the half with points for Two Mile House, as they led by eleven. Courtwood had the advantage of the wind in the second half, but they were going to need to step up a few gears if they were going to get back into this one.

Sean O’Flynn had a chance within seconds of the resumption, but dragged his shot well wide. Courtwood did get their goal though, rather fortunately it must be said. Luke Doran’s shot dropped short, but Niall Dunne got in front of keeper Didier Cordonnier, and fisted it into the net.

Casey and Healy attempted to calm any signs of a storm with a point apiece, but Courtwood came back and nabbed a second goal. Niall Dunne again had a part to play, as he sent in a dangerous long ball to Paddy Wilson, who batted it down into the path of Luke Doran, and he punched home.

Luke Doyle then had the ball in the back of the net once again for Courtwood minutes later, but it was disallowed harshly as the referee called for a foul in the build-up. Kinsella sent over a lovely point, before Danny Luttrell got on the score sheet, converting a ’45.

That was as close as they would get though, as a goals from Casey and Mark Sherry meant Courtwood had too much ground to make up, and they fell to a ten point defeat in the end.