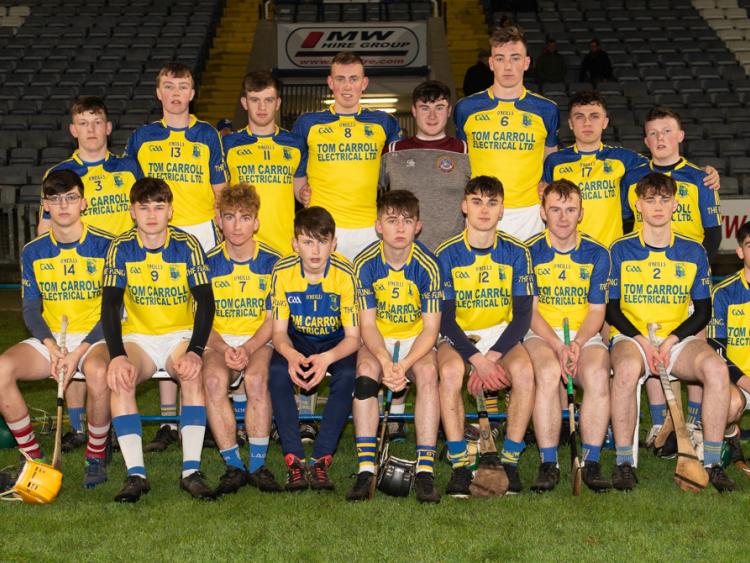 A strong first-half showing ensured St Lazarian’s, Abbeyleix prevailed with two goals to spare over a gutsy Clonaslee St Manman’s side in O’Moore Park on Friday evening to claim the first title of the new U-19 grade.

Clonaslee St Manman’s started the game well with early points from DJ Callaghan and Liam Senior thrusting them into an early lead. Abbeyleix hit-back shortly after with Aaron Brennan and Fionan Mahony levelling the sides before Stephen Thompson drilled over the black spot to edge Abbeyleix into the lead for the first time.

DJ Callaghan, Paddy Hyland and James Hickey registered points for Clonaslee, but points from Ciaran Byrne and Liam Doyle left the sides level on five points apiece with a quarter of an hour played.

Abbeyleix took the reigns for the remainder of the half as they rattled off 1-3 without reply before the break. Ciaran Byrne and Aaron Brennan clipped over to push them ahead before the goal arrived two minutes before the break from Kevin Fitzpatrick. Brennan rounded out the half with a free to see Abbeyleix lead by six points on a scoreline of 1-8 to 0-5.

Abbeyleix picked up where they left off after the restart with Ciaran Byrne and Stephen Thompson finding their range to extend their lead to eight points. Clonaslee hit their stride shortly after as they hit four points on the trot through DJ Callaghan (3) and Paddy Hyland to halve the deficit with just under fifteen minutes left to play.

Abbeyleix replied in devastating fashion with Ciaran Byrne finishing his scintillating run with a well-taken goal to restore their lead to seven points. Opposing full-forwards, Paddy Hyland and Aaron Brennan, traded points before Bob Downey and Callaghan brought them to within five with just over ten minutes left to play.

Abbeyleix finished strong with additional points from Byrne and Brennan sandwiched either side of a fortuitous goal from goalkeeper Alan Kelly who’s long-range free evaded everyone before bouncing into the Clonaslee net four minutes before the end.

Clonaslee rallied in the final minutes with Bob Downey’s drilled shot on goal brilliantly deflected over the bar by Kelly in the Abbeyleix goals, but Kelly was to be beaten a minute later when Tom Horan grabbed a consolation goal two minutes from time. Abbeyleix ran out deserved six points winners in the end to be crowned champions.