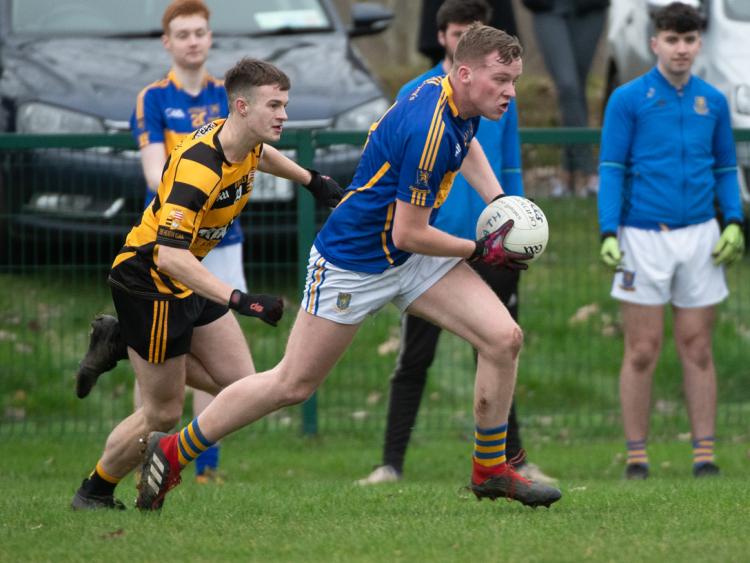 Liam Whelehan on the attack for O'Dempsey's against Benny Carroll, The Heath. Pic: Denis Byrne.

A clinical approach in front of goal proved to be the difference in this Laois U-21 'B' football final on Sunday, as O'Dempsey's proved too strong for The Heath.

Mark Barry, who impressed throughout 2018 with the O'Dempsey's senior side, was the scorer-in-chief, and he was ably assisted by a raft of his senior colleagues.

Shane Nerney was excellent at midfield and the likes of Tom and Johnny Kelly, Cormac O'Hora and Dan McCormack were more than able to handle a solid Heath side.

The men in black and amber were second best on the day, but they put in a battling display, and had some fine players on show themselves. However, O'Dempsey's were just a few steps ahead, and ran out deserving winners.

They hit the front early on, and in somewhat fortuitous fashion too. A Mark Barry free dropped short in the area, and stand-in goalkeeper Dan Hennessy opted to come to try claim possession, but in the scrum for the ball, it ended up in the net.

Barry added a point from a free moments later, and O'Demspey's found themselves four ahead with a little over a minute played.

The Heath were stunned by that opening salvo from O'Dempsey's, but they responded to that nightmare start really well. The impressive Leon Holland got them on the scoreboard in the sixth minute with a free, and they picked up from there.

Centre-back James Phelan made a storming run up the field a minute later and duly slotted over the bar, before another free from Holland reduced the gap to just a single point, 1-1 to 0-3 the score approaching the tenth minute.

Unfortunately for The Heath, they would only add another point before half time, while for O'Dempsey's, their scoring either side of the interval proved to be the winning of the game.

It started with Mark Barry, as he hit four points from frees between the 10th and 15th minute, before adding a point from play for good measure.

Leon Holland replied for The Heath after good work from Neil Keane to set him up, but there was a final sting in the tail from O'Dempsey's in the first half.

A good team move saw them break through on The Heath goal, and Daithi Howlin was on hand to apply the finish. That goal was a real suckerpunch for The Heath, and they found themselves eight points in arrears at the break, 2-6 to 0-4.

If they were hoping the second half would bring an upturn in fortunes, then that sadly was not the case as things got worse moments after the restart.

Dan McCormack, a totemic figure in the full-forward and so often a source of scores for the senior side last year, showed his goal-scoring instincts once again as he nabbed a third goal for the Killenard men.

Leon Holland lead the response for The Heath once more as he chipped in with a point, but Mark Barry quickly matched it with a free.

Jordan Walshe, one of The Heath's best players on the day, tried to spur his side to life with a point, and they showed positive signs when James Phelan followed up with a sweetly-struck 45, but they were hit with another setback soon after.

A foul on Dan McCormack in the penalty area handed O'Dempsey's the chance for a fourth goal, and Mark Barry was on hand once more with the finish.

That ended the game as a contest, and even though O'Dempsey's lost captain Liam Whelehan to a red card, it came too late for The Heath to make a meaningful impact on the game.

Neil Keane and Leon Holland (2) did chip in with scores for them down the stretch, but another from Mark Barry saw O'Dempsey's comfortably home at the final whistle.