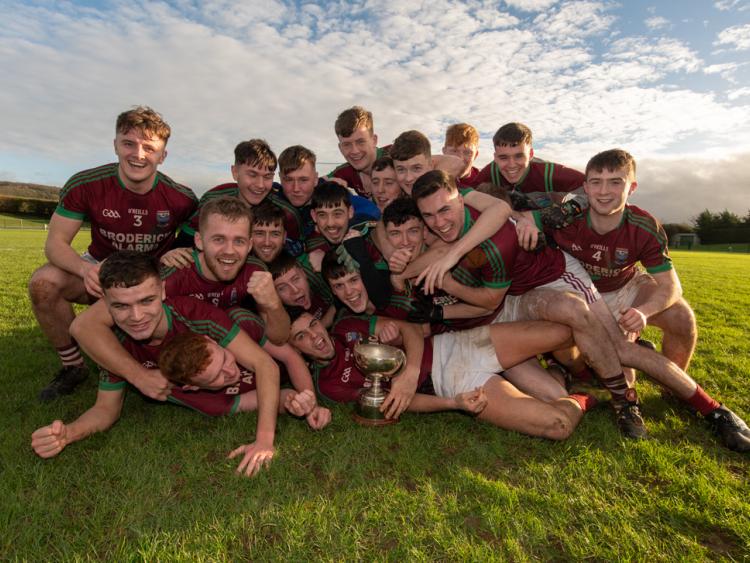 On a windy and wet day in Bill Delaney Park, the 2017 winners of this competition, Portarlington, met the 2015 and 2016 champions, St Joseph’s.

Portarlington proved too strong though on the day, as they won the last ever U-21 championship thanks to a strong first half showing.

Portarlington got off to the dream start, as midfielder Eoin McCann found the net. Sean Byrne opted to send a high ball in, and Ronan Coffey rose above James Kelly, fed McCann, who took it past Adam Nichol-Waugh for the first score.

St Joseph’s had thirteen men defending for most of the first half, as they looked to keep the damage to a minimum playing against the wind. Jake Foster and Colm Murphy extended the gap with points from placed balls, before St Joseph’s had a period of play where they held a lot of possession, but couldn’t work any scores.

Portarlington went down the other end, and the talented Daragh Galvin made a bit of room and curled over a nice point. Brian Daly finally managed to get St Joseph’s on the scoreboard with a free, but Jake Foster replied with one of his own for Portarlington.

Murphy caught the kick-out, and surged forward despite the tackling of several St Joseph’s defenders, before slotting it into the bottom right corner. Murphy also kicked the last score of the half, as he split the posts after strong running from the excellent Colin Slevin.

St Joseph’s trailed 2-6 to 0-2 at the interval, but the game wasn’t finished yet, as the wind was a huge factor in Portarlington’s advantage. They required a fast start to eat into the deficit, but all they could manage was a Brian Daly free early on due to organized Portarlington defending.

Portarlington nearly killed the game off when Daragh Galvin played a one-two with Sean Byrne, but Adam Nichol-Waugh saved well to deny the corner forward. St Joseph’s continued trying to find ways past the Portarlington rearguard, but were finding it tough. They did pull the gap back to six, as the St Joseph’s faithful found their voice.

However, St Joseph’s still needed goals in the short time that remained, and never looked like scoring them. Jake Foster put over a simple free for Portarlington’s first score of the second half, and gave them a bit of breathing room.

Brian Daly kept St Joseph’s in with a glimmer of hope with his fourth free of the afternoon, but the clock was against the men in yellow and blue. They threw men forward, but Jake Foster broke any spirit they may have had left with the insurance point, as Portarlington celebrated at the full time whistle.