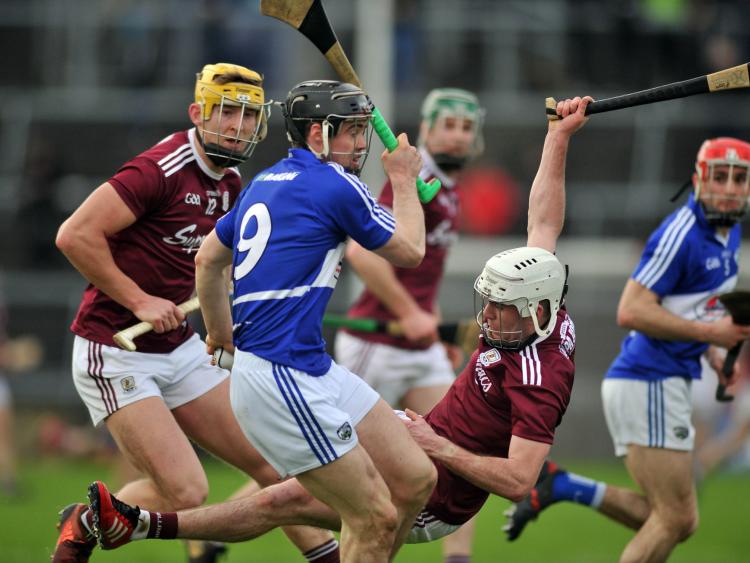 PJ Scully on the attack for Laois. Pic: Ray Ryan.

The Laois hurlers fought like a boxer who was knocked to the canvas in the early rounds but still hung in there to lose on points last Sunday afternoon in Galway.

Manager Eddie Brennan expressing his satisfaction at the side’s battling qualities after they went 0-10 to 0-2 behind after 18 minutes but then effectively kept parity with their opponents from then on.

“We were under no illusions as to what we were facing, but you stick at it, you don’t throw in the towel, and I’d be proud of them in that regard” said the former Kilkenny hurler afterwards. “They stuck at it and fought to the bitter end. We got a couple of good scores, the match was maybe dead, but I’ll take it given where it looked as if that match was going”.

Certainly things looked to be going very much in the wrong direction early on as Galway roared into the game with Laois visibly struggling to deal with the increase in tempo from their Walsh Cup games.

Unlike most of the games played all across the country at the weekend, and very atypically for Pearse Stadium in Salthill which has become known as 'the wind tunnel' to local residents, calm conditions prevailed at the seaside venue and long-range shooting became a real option for both sides.

Cathal Mannion picked off three superb points in the opening minutes and his midfield colleague Sean Loftus added another, as Laois dropped players deep to cover their full back line but could only watch on as points sailed over their heads and over Enda Rowland’s crossbar into the bargain.

Aaron Dunphy and Paddy Purcell picked off good scores in reply, but Galway continued to pile on the pressure and a number of Joe Canning frees moved them eight points clear.

A brief scoreless spell lasted for almost five minutes was broken by a couple of PJ Scully dead ball scores, but any lingering hopes of Laois working their way back into the game were blown away when a missed tackle in the half back line allowed Loftus to break cover. Matthew Whelan did his best to batten down the hatches with a robust challenge on Brian Concannon that left referee Johnny Murphy play advantage, the Galway full forward was able to get his handpass away to Davy Glennon and a simple finish resulted in the game’s first goal.

Leading 1-15 to 0-7 at half time, most of the Galway supporters in the 8,200 crowd would have expected the Tribesmen to push on and record a comprehensive win. The early minutes of the second half followed that script, with the home side getting a run of simple frees that were easily converted by Joe Canning, not to mention a ’65 that was given after Joe Phelan made a fantastic last-ditch block to deny Davy Glennon a second goal.

Yet after they fell 14 points behind, Laois got a kind break when a long ball into the full-back line broke perfectly for John Lennon, and the Rosenallis player produced a crisp ground pull that swept the sliothar past Fergal Flannery and into the net.

That was the oxygen Laois needed to muster up one last push through the final quarter and they produced some of their best hurling in this phase of the game, conceding some scores as the marking at both ends of the field grew that little bit slacker, but also picking off some fine points of their own at the other end.

Jack Kelly split the posts with a magnificent strike from the shadow of the packed stand, Mark Kavanagh took over freetaking duties after PJ Scully was withdrawn and converted all four of his opportunities, while Cha Dwyer came off the bench to pick off another good score, all ensuring that when Paddy Purcell set up John Lennon for a second goal chance at the death, the lead briefly went down to just seven points.

Two late Galway scores stretched the gap again, but that still represented a worthy showing from Laois – not one that ever looked likely to obtain a positive result, but one that sets the team up in good stead for another tough clash with Waterford at the weekend, not to mention the crunch ties against Dublin, Offaly and Carlow that are still to come.

Read also: ON THE ROAD WITH LAOIS - Beating Down and getting beaten Down by late-night radio