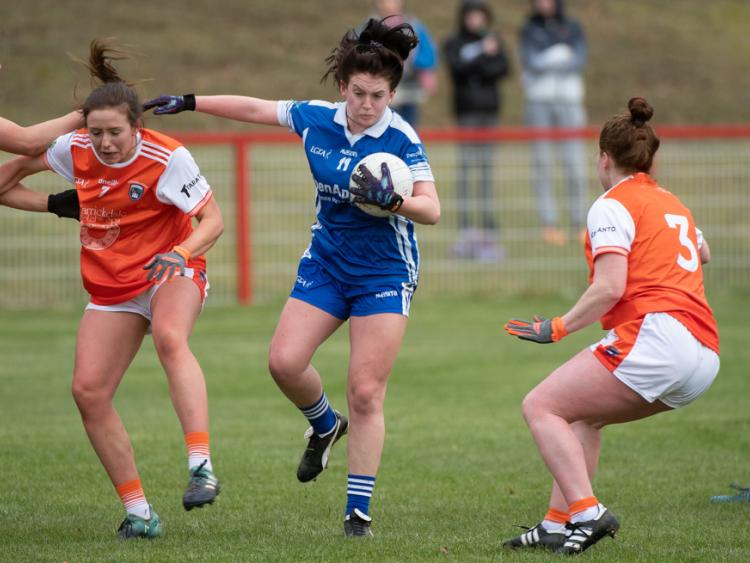 Emma Lawlor in possession for Laois against Armagh in Emo on Sunday. Pic: Denis Byrne.

A number of goals conceded that could’ve so easily been avoided cost the Laois ladies any chance of a result in Emo, as they fell to a big defeat at the hands of an organized Armagh outfit.

Niamh Marley opened the scoring for the Orchard county, before they had the ball in the back of the Laois net, only for it to be disallowed sue to the square ball rule. Nevertheless, their captain Kelly Mahon doubled their advantage, before Alanna Havill got Laois on the scoreboard.

Kelly Mahon continued to hurt Laois , adding on a further two points to her name. Laois went down the other end, and while Mo Nerney’s shot struck the top post, Alanna Havill was on hand to kick her second.

Kelly Mahon (free) and Aisling Kehoe swapped points, before Armagh stretched their lead with a quick-fire 1-1. Aoife McCoy bundled her way through a few challenges before popping over, and then Aimee Mackin punished Laois from their kick-out with a powerful finish.

Aisling Kehoe doubled her tally for Laois, but Armagh struck again with their second goal. Some beautiful passing between sisters Aimee and Blaithin Mackin resulted in Aoife McCoy slotting home. Aimee Mackin tagged on another point after Laois gave away the ball in the middle third, in which they were struggling.

Nice link up play between teenagers Emma Lawlor and Erone Fitzpatrick resulted in the latter getting one back for Laois, but Mahon and Niamh Marley kept Armagh well on top. Emma Lawlor sliced one over the crossbar with her weaker foot to end the half, as Laois trailed by nine.

Laois made a good fist of the first ten minutes of the second half, reducing the gap back to five, but that was as close as they could get, as the girls from up North pulled away after. Centre forward Emma Lawlor fired over the first two points of the half, with one from a placed ball and one from play.

Mahon knocked over a free for Armagh, before Laois raised a green flag of their own. Again it was Emma Lawlor and Erone Fitzpatrick at the heart of it, as Lawlor burst past a few orange jerseys before feeding Fitzpatrick, who blasted past Caroline O’Hare.

However, that good work was quickly cancelled out, as Armagh scored 1-2 without reply to end the game as a contest. Full forward Aoife McCoy grabbed a point, before Aimee Mackin collected a rebound and scored her second goal of the match.

Blathin Mackin got her name on the score sheet with a point, as Laois’s Lawlor replied with their second last point of the day, as Armagh powered to an away victory.

It could’ve been a lot worse had Laois keeper Fiona Kelly not been on her game, as she pulled off two excellent stops to keep the score down. Armagh still managed to fire two goals in towards the end, as McCoy and Mahon added to their impressive tally by punishing wayward passes out from the back from Laois.

Midfielder Joyce Dunne traded points with McCoy at the very end, as Laois will now look to bounce back from this demoralizing defeat with a difficult away trip to Tyrone next.