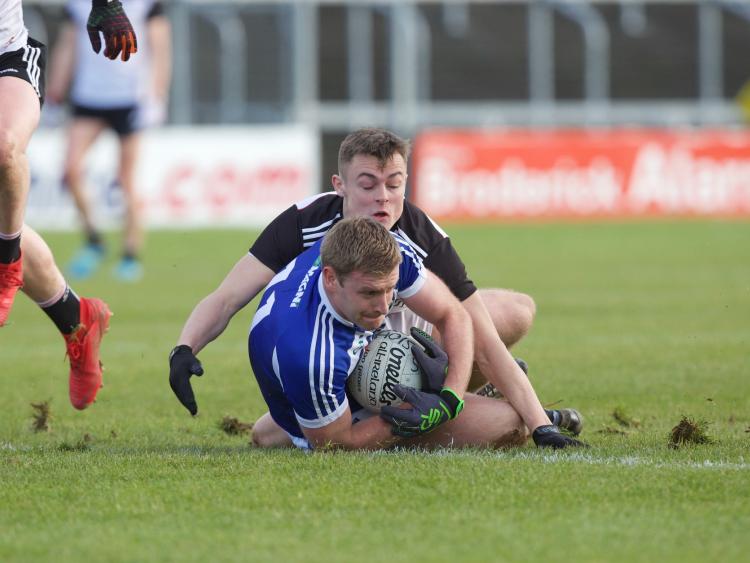 Goals from Stephen Attride and Donie Kingston early in the second half set Laois on their way to victory in today's NFL Division 3 clash with Sligo.

After the disappointment of losing out to Louth in Croke Park the week before, it was a better outing for Laois this time around, with plenty of room for improvement also.

In a slow start to the game, we had to wait almost six minutes for the opening score, which came from the left boot of Conor Boyle. Donie Kingston's initial shot for goal was well-saved by Aiden Devaney, but the ball was eventually worked back to Boyle, who popped it over the bar.

A minute later Laois doubled their lead when Evan O'Carroll claimed an attacking mark and curled a nice shot over the bar, and then a foul on O'Carroll saw Paul Cahillane slot over a third. Laois were well on top now, but Sligo finally stirred themselves in the 16th minute.

A free from 30 yards out allowed Adrian Marren to take aim at the posts and he duly pointed. Aiden Devaney then got forward to launch over a long-range free, but Laois responded with two quick-fire points from Danny O'Reilly and Evan O'Carroll (free).

Laois were probably the better side during this spell, and indeed for most of the first half, but they couldn't open up much of a lead as Sligo managed to keep themselves in touch. Liam Gaughan scored a brilliant point from the right wing to get them back within two, but Laois again replied with a double.

Evan O'Carroll was the scorer of both, although the second, which came when a goal-line clearance by Sligo struck his leg and looped inches over the bar, could well have been a goal. Gaughan hit back for Sligo once more to get the gap down to three, as Sligo refused to let the hosts pull away.

Both teams managed two more points each before the break, the pick of them an excellent long-range free from the near the left sideline by Aiden Devaney, leaving Laois 0-9 to 0-6 ahead at the break.

The opening ten minutes of the second half were what ultimately won the game for Laois, as they blitzed Sligo during that spell. It started with points from Paul Cahillane and Evan O'Carroll, before some patient build-up play saw Laois pass the ball around for a minute or so before an opening arrived for Stephen Attride, and his low shot nestled in the bottom corner.

Evan O'Carroll added a point less than a minute later, and despite Marren hitting back with a free for Sligo, Laois were on the charge. Mark Barry curled over a fine point after another patient spell in attack, and then Donie Kingston's powerful shot flew past Devaney for a second goal. That saw the hosts leading 2-13 to 0-7 after 45 minutes of play.

Sligo needed to act fast and they duly did with Liam Gaughan setting up Barry O'Gorman for a goal from close range. Laois were then dealt a blow when wing-back Marty Scully was red-carded and Sligo then got in for a second goal, expertly finished by Barry O'Gorman once again.

That put the game in the balance again, but Laois responded with a point from Donie Kingston and managed the game all the way to the final whistle to secure a second win of the campaign.