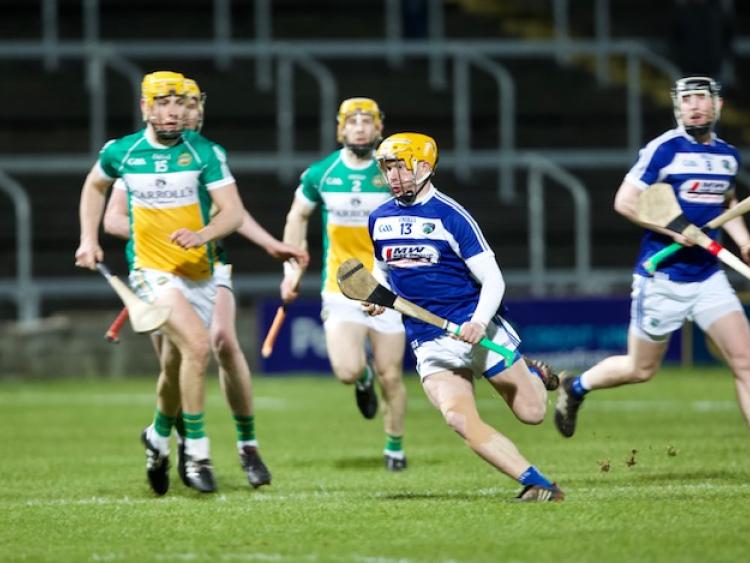 Mark Kavanagh on the attack for Laois. Pic: Alf Harvey.

Laois picked up their first win of the NHL Division 1B season with a crucial victory over neighbours Offaly.

The win sets Eddie Brennan's men up for another vital clash with Carlow next Sunday, but the relegation trap door is opening ever wider for Offaly after a third loss on the spin.

Laois had wind advantage for the first half and they wasted little time in putting Offaly under pressure, the first score coming with a little over a minute gone from a Mark Kavanagh free.

Offaly hit back through Joe Bergin, and that set up a tit-for-tat opening ten minutes, as both sides struggled to impose themselves on the game. Kavanagh and Bergin traded pointed frees and then it was Eanna Lyons' turn to swap scores with the Offaly veteran.

Offaly went ahead for the first time in the 13th minute, and that proved to be a turning point in the game, though not in favour of the Faithful county.

From the resulting puck out Laois stormed forward, Willie Dunphy was put through on goal, and he thundered a shot to the roof of the net. Aaron Dunphy followed it up with two long-range points and Laois were now up and running.

They pressed home their advantage when Paddy Purcell won possession from an Offaly puck out, fed Picky Maher and he in turn set up clubmate Willie Dunphy for his second goal. The home side were flying now and points quickly followed from Maher (2), Aaron Dunphy and John Lennon, as Laois made it 2-7 without reply.

They were 12 ahead with Offaly needing some inspiration from somewhere, and Bergin tried to provide it from a free. Laois replied with a stunning point from Mark Kavanagh. Kavanagh then added two more frees either side of a Kevin Connolly effort, and that saw Laois lead 2-13 to 0-6 at half time. It was the biggest first half score they had ever registered against Offaly.

The visitors made a triple-substitution at half time, and one of those introduced, Shane Dooley, opened the scoring for the second half with a free. Mark Kavanagh's stunning sideline cut cancelled that out, but Offaly supporters finally had reason to cheer when Colm Gath found the bottom corner for a goal in the 38th minute.

That lifted the Offaly team and supporters and they chipped away at the Laois lead, with points from Joe Bergin and Mark Egan helping them get within eight. Laois were struggling for scores now, but came roaring back when Paddy Purcell's shot was saved by Eoghan Cahill, and Picky Maher was on hand to fire in the rebound.

Offaly came again with pointed frees from Joe Bergin, narrowing the gap to seven points, but Mark Kavanagh's accuracy from placed balls settled any Laois nerves and made Joe Bergin's goal from a late free a mere consolation.