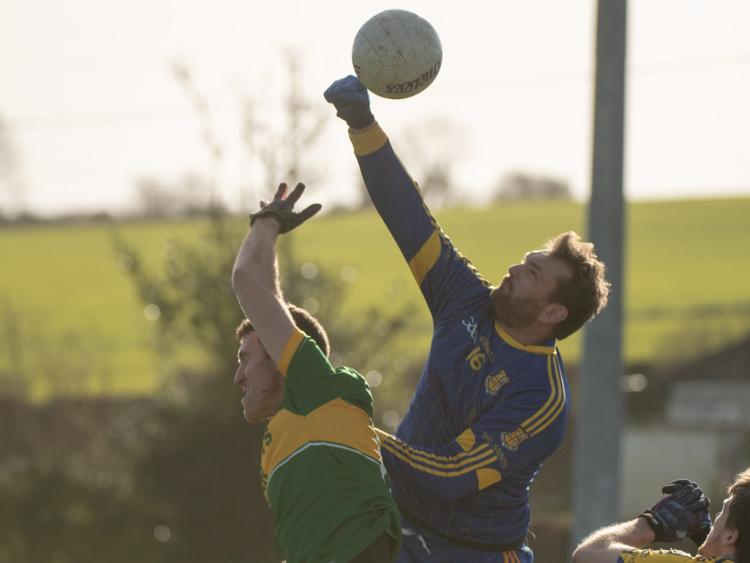 Despite losing two players to red cards, Ballylinan nearly managed to escape with something from this Kelly Cup quarter-final, but near neighbours St Joseph’s managed to fall over the line in the end.

Ballylinan’s main man up front for the day, Cieran Farrell, opened the scoring for the visitors from a free. Ian Dempsey responded for St Joseph’s after some well-worked build up play, and they went ahead soon after thanks to a Peter Kealy effort.

A sloppy ball out of defence from St Joseph’s allowed Cieran Farrell to punish with his second point. St Joseph’s were the more organized though in the first half though, and they opened up a two point gap thanks to a close-range effort from Seamus Farrelly and Peter Kealy’s second of the day.

Oisin Leonard played a nice ball into Cieran Farrell, who returned it on the run to the wing back, and he split the posts with a fine effort. Brian Daly knocked over a free in response, and then came one of the key moments in the game, as Pauric Walsh received his marching orders after a late sliding challenge on Noel Leech.

St Joseph’s Tom Dunne burst up field from full back to put his side three to the good, before Liam Kealy reduced it back to two. Brian Daly slotted over a free to end the half, with St Joseph’s leading 0-7 to 0-4.

The Kellyville men began the second half strongly, as they looked to finish off the fourteen men of Ballylinan. Seamus Farrelly and Brian Daly (free) points meant St Joseph’s held a five point advantage. They didn’t really push on though after, as Ballylinan slowly ate away at the lead.

First half substitute Jamie Farrell fired a splendid drop-goal type pass into Cathail Dunne’s hands, and he was one on one with goalkeeper Tommy Knowles, but tapped it over. Brian Daly responded with a fine effort with the outside of his boot.

Cieran Farrell knocked over a free for Ballylinan, but they were dealt another blow to their chances when John Kealy received his second yellow after getting involved in a tussle with Conor Kealy. They didn’t throw in the towel though, as Cathail Dunne and Cieran Farrell (free) raised white flags to leave two between the sides.

The impressive Seamus Farrelly at corner forward replied with his third of the afternoon, before Cieran Farrell stuck over another free. Niall Brennan looked to have grabbed an insurance point for St Joseph’s, as they led by three once again.

However, Cieran and Jamie Farrell landed frees to leave the minimum in it, but Clifford Ward blew the full-time whistle just in time for St Joseph’s.