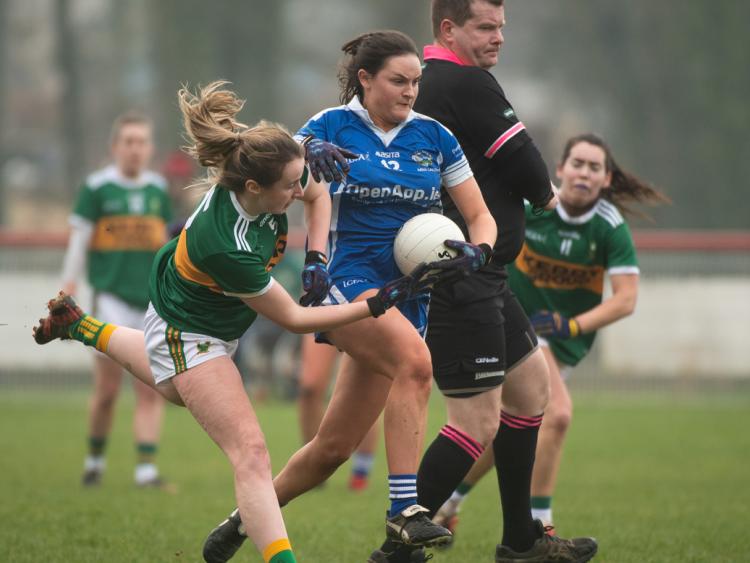 Erone Fitzpatrick on the attack for Laois. Pic: Denis Byrne

Despite putting in a competitive first half showing, the Laois ladies fell to a third consecutive defeat in the league after half-time Kerry substitute Hannah O’Donohue ran riot, netting a hat-trick to her name.

Laois started well, as Emma Lawlor atoned for an early wayward free with a much more accurate one minutes later. Lawlor then fed Erone Fitzpatrick, who should’ve done better with her effort as the goal was gaping.

Lawlor placed over another free, before the other centre forward, Sarah Houlihan, responded with Kerry’s opener from a placed ball as well. Lawlor scored her third point and her first from play after a bursting run through.

Sarah Houlihan skimmed the top of the crossbar and over with her free down the other end, before Laois supporters in Emo had something to cheer about. Good build-up play involving Mary Cotter, Emma Lawlor and Erone Fitzpatrick allowed Shannon Costello to goal for Laois.

However, Kerry responded well to that setback. Sarah Houlihan and Erica McGlynn pointed, and despite Megan Dunne’s point after, Kerry scored 2-2 without reply to take control. Houlihan converted a free, and then no one stopped Amanda Brosnan from running through and firing past Aoife Conlon Hyland.

It was all too easy for Kerry, as Aoife O’Callaghan then slipped in Houlihan, who raised another green flag for the visitors. Niamh Carmody then could’ve grabbed another, but her shot blazed over the crossbar.

Lawlor and Erica McGlynn exchanged points, before Laois began to settle the storm with Megan Dunne and Lawlor reducing arrears to three. Two Houlihan frees wiped out that good work, but Shannon Costello almost goaled again before half-time, only for Laura Fitzgerald in goals to pull off an excellent save.

Laois couldn’t have started the second half any worse, as Hannah O’Donohue came on and tormented Laois from minute one, showing serious pace and providing a low, unstoppable finish for her first goal. Houlihan added another point to her name, before Laois looked to claw themselves back into the contest once more.

Two points from Lawlor and one from Megan Dunne brought the difference back to two goals, but again that hard work was swiftly wiped out, as O’Donohue instinctively finished to the back of the net again.

Aoife Newell got her name on the score-sheet for Kerry, before O’Donohue completed the hat-trick, as her pace proved impossible to deal with from a Laois perspective.

Laois performed bravely towards the end, with Lawlor and Aisling Kehoe points aiding Laois in their search of restoring some pride back. Substitutes Miriam O’Keefe and Alanna Havill exchanged scores, before the super Sarah Houlihan struck Kerry’s sixth goal.

Lawlor and Megan Dunne replied for Laois, and then Erone Fitzpatrick’s strong running was rewarded with Laois’s second goal. Houlihan grabbed Kerry’s last score of the match from a free, with Laois ending the game positively through Aisling Kehoe and Lawlor (free) points.