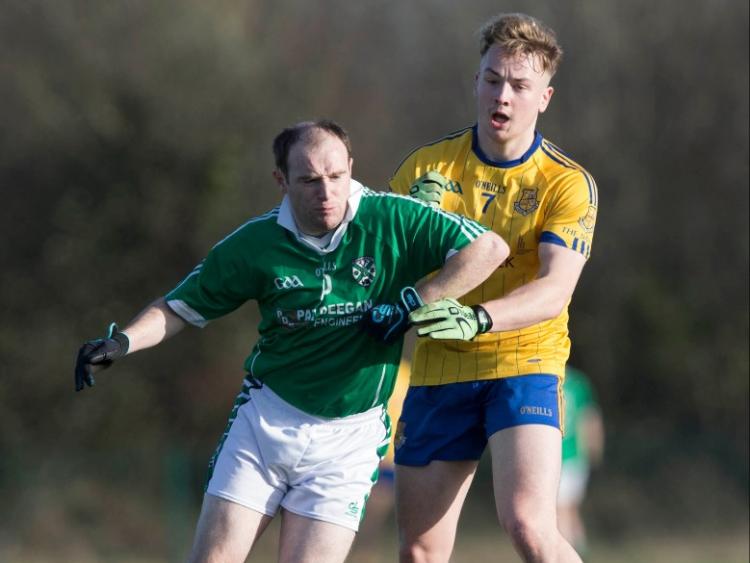 In what was a hard-hitting, neighbourly clash between two teams who met in last year’s senior football championship quarter-final, St Joseph’s and Stradbally, the Kellyville men once again prevailed, this time thanks to an excellent team goal near the end.

Stradbally began well, as John Clancy and Colm Kelly (free) placed over a point apiece. St Joseph’s were then dealt another blow as full forward for the day, Enda Butler, was shown a black card for protesting a decision that went against him.

Niall Brennan came on in his place, and he kicked over St Joseph’s opening score. Stradbally appeared much the hungrier in the early proceeding though, as Benny Lawlor played a one-two with John Clancy, and crashed one into the top right corner. Seamus Farrelly had an opportunity to get a goal down the other end for St Joseph’s, but his shot was too close for Wayne Comerford.

Stradbally continued to be the more clinical of the two teams, and two points from corner forward Jack Langton were sandwiched between a lovely outside of the boot one from Colm Kelly.

However, they would only manage one more score before the end of the half, as St Joseph’s picked it up a few gears. Corner back Jack Lacey scored the first of eight consecutive points, but before the other seven went over, Ciaran Ramsbottom saw his effort cannoned off the bar.

Brian Daly, Conor Kealy, Bernard Wheatley and Ramsbottom all raised white flags, before Wheatley raised a green one for the home side. Poor organisation at the back from Stradbally from a free allowed the midfielder to find the back of the net far too easily.

Colm Kelly landed the last point of the half, but the second half began as most of the first ended, with St Joseph’s on top. Brian Daly converted a free, and then centre forward Conor Kealy curled over his second of the match.

However, Stradbally finally came back to life and brought the game back all square. Benny Lawlor opened Stradbally’s account for the second half, before Colm Kelly placed over two frees, and a superb long-range effort.

Kelly then nearly caught Noel Garvan asleep with a short free, but fortunately there was a St Joseph’s defender on the line to gather. Ian Dempsey was brought on with nine minutes of normal time remaining, and he showcased all his experience with a clever dummy, and an accurate effort over the bar.

However, Stradbally led once again, as Damien Murphy levelled, before half-time substitute Jamie Devoy fired over from close-range.

Then came the winning goal for St Joseph’s though, and what a goal it was. Dean Brophy, Brian Daly and Conor Kealy played some intricate handpasses with each other, before Kealy found Ramsbottom waiting in the square, and he palmed to the net.

Bernard Wheatley gave St Joseph’s a three point cushion, before Stradbally had one more opportunity to force extra-time, but Charlie O’Brien hit the top post with his effort.