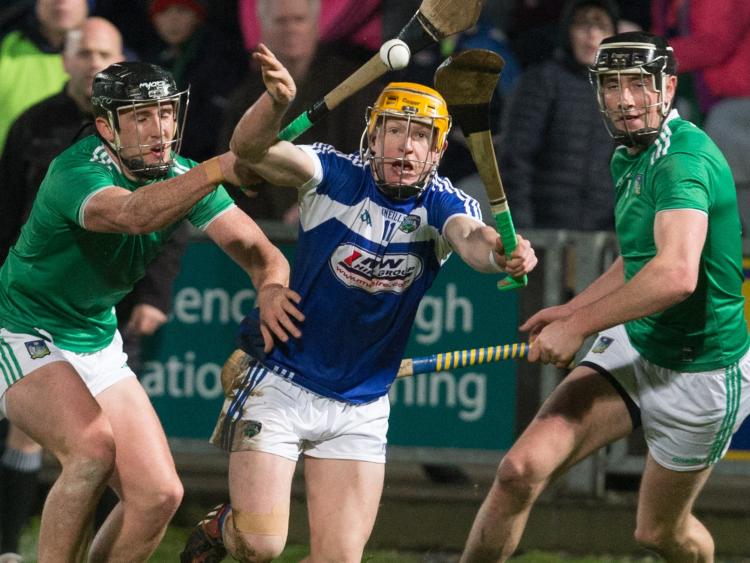 Mark Kavanagh on the attack for Laois. Pic: Alf Harvey.

The reigning All-Ireland champions were never in any danger here, although had Laois been even a bit more clinical in the first half they could have made things a bit more interesting.

Laois came in the hope of causing one of the biggest upsets in recent history, but Limerick wasted little time in ruling that out. Barry Murphy (free) gave them an early lead, and even though Lee Cleere equalised for Laois, Limerick were in a ruthless mood.

David Dempsey restored their lead with a point before a slick passing move ended with Seamus Flanagan through on goal, and he powered a shot to top corner. Peter Casey and Declan Hannon followed it up with a point apiece, and then another free from Murphy saw the Treaty lead 1-5 to 0-1 after just ten minutes.

Laois, to their credit, were working incredibly hard but they were repeatedly let down by their shooting. They recorded 14 wides in total in the first half, although Limerick were successful in forcing them to shoot from distance. The home side finally got their second point after 13 minutes, thanks to a long-range free from goalkeeper Enda Rowland.

Having started with a clinical burst, Limerick played within themselves for the next twenty minutes or so. With the Laois attack racking up wide after wide, the visitors were under no great pressure and could fashion a score whenever they needed it.

Mark Kavanagh's freetaking finally gave Laois a bit of a foothold in the game, as they got the score back to 1-8 to 0-5, but Limerick finished out the half strongly. Barry Murphy pointed his third free of the half before Conor Boylan managed to squeeze a shot past Enda Rowland from a tight angle, and those scores helped Limerick lead 2-11 to 0-6 at half time.

Two points in less than a minute after the restart pushed the Limerick lead out to 13 points, and that set the tone for a second half which was as one-sided as the first. Jack Kelly got a point back for Laois, but Barry Murphy hit the next three points for Limerick, with Paddy Purcell managing one in response for Laois.

Murphy (free) and Mark Kavanagh then traded scores, and the rest of the game was played out with plenty of effort but little in the way of intrigue, as Limerick picked off scores at their ease. Laois were unlucky to see a late consolation effort at a goal from sub Aaron Bergin hit the post, as Limerick ran out comfortable winners.

Much tougher challenges lie ahead for Limerick, while for Laois their NHL campaign should stand them in good stead for their upcoming Joe McDonagh Cup campaign.