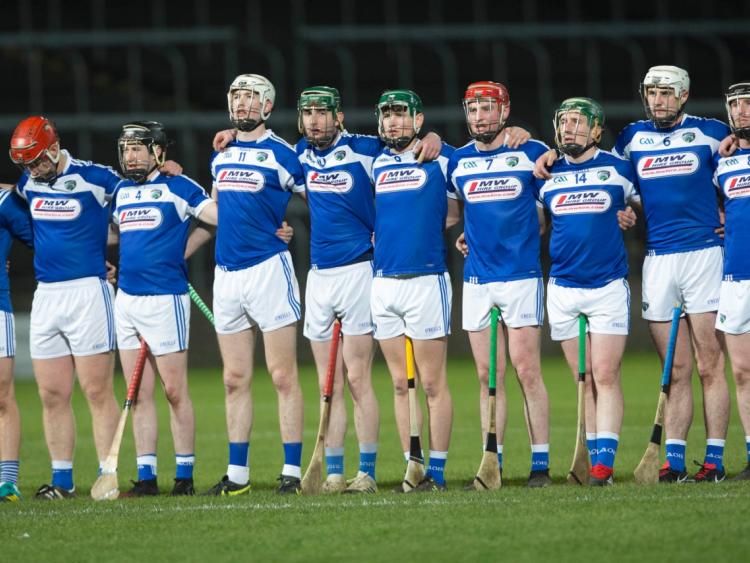 The Laois senior hurlers before the game against Offaly. Pic: Alf Harvey.

Saturday night's defeat to Limerick brought the curtain down on another NHL campaign for Laois. However, unlike some other seasons in recent history, they would be well within their rights to take the acclaim of the crowd before shuffling into the wings this year.

A return of one win and one draw from six games may not be the the ratio Laois were looking for, but it would be churlish to suggest meaningful progress has not been made.

Laois hurling supporters may not be numerous, but they are knowledgable, and they will know from watching the team so far this year that they have improved. As supporters, the first thing we all look for is effort, and that has been evident in abundance so far. That is a testament to both players and management, as it takes mutual efforts on both sides to create an atmosphere where players are prepared to give their all in every game.

There has been progress too in the manner in which Laois look to use the ball, with the forwards moving a bit better than we have seen in the past, a greater use of handpassing, while Enda Rowland has been a bit more judicious in his puck out strategy also. The defence has really impressed too, and given the setbacks Laois have had to deal with this year, it is encouraging to be looking back on this league campaign and feeling positive about it. It seemed unlikely we would be doing that at the start.

The absentees have been well-documented, but even among those on the panel, there have been significant injuries, suspensions and lack of form. In spite of that, Laois still qualified for a quarter-final, humbled Offaly in O'Moore Park, drew with Carlow despite not playing even remotely well, and probably should have beaten Dublin in Parnell Park.

Here, we take a look at some of the big talking points to emerge from the last couple of months.

Phelan having best season of career at corner-back

When it was announced at the start of the year that Joe Phelan was to be the team's vice-captain, it was always going to be interesting to see how he responded to that show of faith. Quiet by nature, he has set about leading by example, and what a season he has had so far.

He was probably Laois' best player over the six games, with his tackling, timing, pace and reading of the game all at their best ever levels in a Laois jersey. He hasn't the physicality a lot of intercounty players have nowadays, but instead he hurls clever and time and time again during the league he had a well-timed tackle, read the pitch of the ball better than his marker, or made a clever pass to get himself, and his team, out of trouble.

The entire Laois defence have been excellent so far this year, but Phelan has stood out from the rest.

When teams are encouraged to work harder than they have before, then those that engage with the work rate invariably see results, and start to influence games. That has been the case so far this year, with the next generation of Laois hurlers making their mark on the scene.

Lee Cleere was superb against Limerick, and it was a pity he missed so many games through suspension. Aaron Dunphy has had his best season so far at senior level, coming up with some impressive scores. Sean Downey has bulked up over the last 12 months and that stood to him throughout the league. Donncha Hartnett nailed down a corner-back position and has been excellent.

Ryan Mullaney had his best year to date at senior level in his new role at centre-back. Jack Kelly has also established himself and has shown a good eye for a score. Padraig Delaney looks like he's been hurling at this level a lot longer than he has been. Mark Kavanagh took on the mantle of free-taker and chief scorer, and hasn't wilted under the pressure.

Most of those players are in their early to mid twenties, and will be hurling together with Laois for the next six to eight years, if injuries and interest allow it. This has to be their baseline level of performance though, and they all need to push on from here in the months and years ahead.

Gauntlet thrown down to established players

We have become accustomed to many things in Laois, among them the sight of certain players starting games in the blue and white. What Eddie Brennan and his management team have shown so far is that they are prepared to thrust a young player into the action if a more established one isn't performing.

That could be seen on Saturday night, as neither Stephen Maher nor Cha Dwyer were included from the start. Maher was eventually brought in late in the game, but Cha saw no game time at all. Mark Dowling and Stephen Bergin were drafted into the forward line to start in their place, and PJ Scully was sent in from the subs bench before either of them.

Picky saw plenty of game time over the course of the league, but his confidence seems at an all-time low at the moment. His touch is not as sharp as it normally is, he's struggling to win and hold onto possession, and everything just seems difficult for a player who normally does the difficult things a lot easier than most.

The players will get back to their clubs in the coming weeks, and hopefully that change of scenery will help him to get back to the level he normally operates at. It's a big few months ahead for him before Laois play again on May 12th. It's not that long ago he was one of the best Fitzgibbon Cup players in the country, he shouldn't lose sight of that as he looks for normal service to resume.

For Cha, he only featured fleetingly during the league and looks to have work to do in gaining the trust of the management team. His talent is undoubted and he brings a level of physicality to the game that few other Laois players can match, but he can only unleash that when he's on the field. We're not used to seeing him sitting in the stand, and he's not used to being there either, but he looks like he has a job on his hands in the weeks ahead to convince Eddie Brennan and Co that he should be on the starting team against Offaly in the opening round of the McDonagh Cup.

Fine tuning in attack a key aim ahead of McDonagh Cup

With roughly two months before Laois play again, the management team have work to do to improve the squad ahead of the McDonagh Cup.

After watching the game against Limerick, and the 19 wides which Laois registered, it's fair to say they have work to do in attack. Against Limerick, Laois struggled to work the ball close to goal and so most of their shooting came from distance, in contrast to Limerick, who got a significant number of their scores inside the 45 yard line. Limerick also brought a level of fitness, understanding and conditioning that Laois are unlikely to meet in the McDonagh Cup.

Save for a blistering spell in the first half of the game against Offaly, the Laois attack hasn't really caught fire this year. The form of a few key players (see above) hasn't helped, but it will have to be rectified. Laois won't meet a team as good as Limerick in the McDonagh Cup so they should expect to be able to get closer to goal before shooting, but they still need to improve their touch and their speed in securing possession in attack.

Opposition teams make mistakes when they are forced to think and react quicker than they are accustomed to. To do that, Laois need to get the ball in hand a lot quicker and they need to make more space for their forwards inside the opponents 45 yard line. If they can make progress on that front, they will be a hard team to stop in the McDonagh Cup.