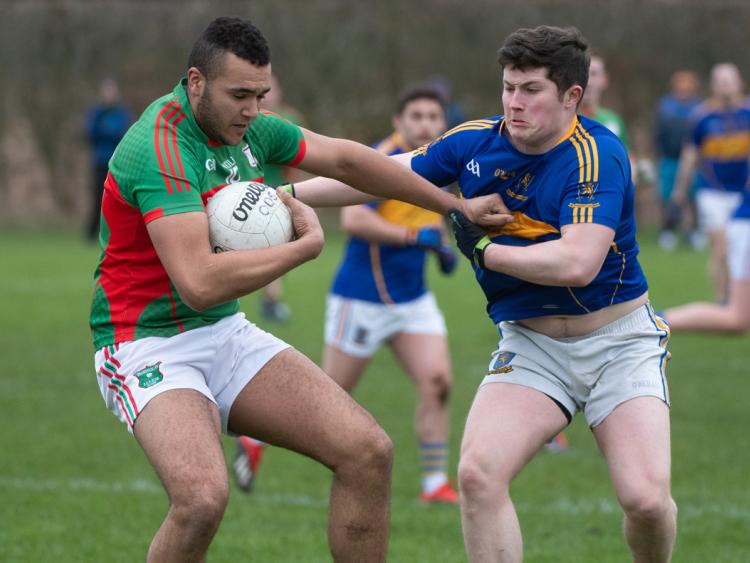 O’Dempsey’s and Graiguecullen faced off against each other twice last season in the championship, with the Carlow border side winning the first round match, but the Killenard men getting the better of the semi-final clash.

This opening round league game was close for most of the affair, but Matthew Finlay’s late goal ensured last year’s league champions grabbed the two points on offer.

Mark Doogue opened the scoring in the Old Pound for Graiguecullen, before O’Dempsey’s midfielder Barry Kelly leveled. Kelly then launched a long ball into the Graiguecullen goalmouth, and there was only going to be one winner between O’Dempsey’s Daniel McCormack and Graiguecullen keeper Ger Kieran, as the big full forward palmed to the net.

Matthew Finlay knocked over a free for O’Dempsey’s, before Jamie Parr hit back with a well-struck 45’ off of a tough surface. O’Dempsey’s kept on top though, as some patient and well-worked build up play from one end of the field to the other resulted in Matthew Finlay hitting the target for them once more.

Graiguecullen finally managed two scores in a row to reduce the gap, as corner forward Dale Byrne slotted over the first free, and Jamie Parr tapped over the second.

The sides then traded a free a piece, before Graiguecullen’s James Doogue fisted the ball over from close range after quick and smooth build up play. After several minutes of both teams turning over the ball and defending well, Graiguecullen pounced for a goal.

Jamie Parr played an inch-perfect over the top ball to Ross Hennessy, and the corner forward placed carefully past Padraig Bannon in goals.

Graiguecullen went in with a half-time lead of 1-9 to 1-6, with that Ross Hennessy goal proving the difference between the sides at the interval.

However, O’Dempsey’s weren’t long making up that difference, as they shot out of the blocks after the break. Matthew Finlay continued to prove his free-taking ability, raising two more white flags, before centre back Robbie Kehoe added another after a clever Daniel McCormack ball.

O’Dempsey’s found themselves level now, and kicked on even more with a further three points without reply. Michael and Matthew Finlay kicked one each, along with Brian Nugent.

Graiguecullen were struggling to work scoring opportunities at the other end of the field, as they were being met by a disciplined and hard-working O’Dempsey’s rearguard. They finally ended the drought when James Doogue split the posts, and clawed back to within a point as Dale Byrne fired over minutes later.

As they went searching for the equalizer though, O’Dempsey’s counter- attacked with pace to put the game to bed. It was a bit of fortune in how it came about, as the ball ricocheted off the top post, and fell to Matthew Finlay, who toe-poked past Ger Kieran.

O’Dempsey’s now look forward to a rematch of the county final when they take on Portlaoise in Rathleague, while Graiguecullen are at home to Ballyroan Abbey next.