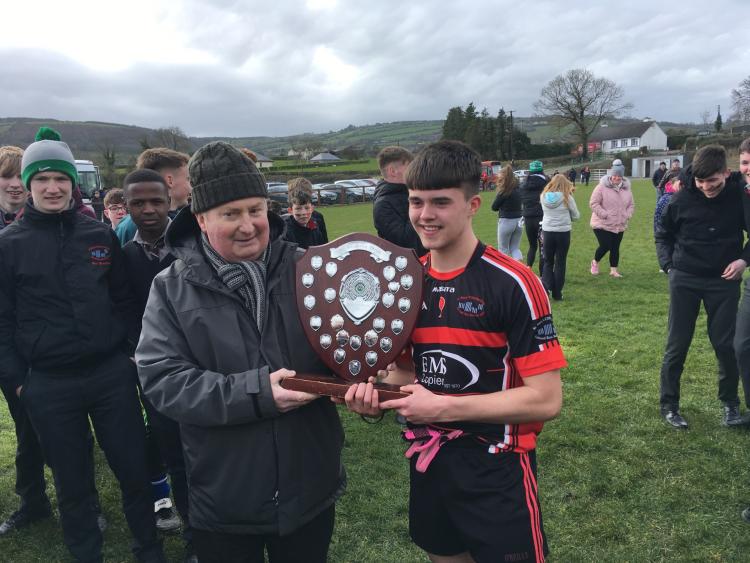 With a strong wind blowing straight down the field, away from the dressing room end, Portlaoise had it at their backs in the first half and had built up a 15 point lead by half time.

Bagenalstown came back at them in the second half, but an over-reliance on one player, Darragh Nolan, for scores limited their scope in attack, and they weren't as clued-in or as well-drilled as Portlaoise in defence or midfield to prevent them picking off scores when they needed them.

After the disappointment suffered by their senior side against Tullamore in recent weeks, it was a welcome fillip for the Portlaoise school, and they were full value for the victory here too.

With the elements in their favour in the first half, they piled the pressure on Bagenalstown from the first whistle. DJ White slotted over an early free to put them ahead, and they pushed up on the Bagenalstown kickouts to force turnover after turnover.

The second point wasn't long in arriving, as Cormac Dunne slotted over and soon after, they had their first goal. A poor Bagenalstown kickout was seized on by the Portlaoise attack, and it was quickly moved to Paddy Hosey, who fired to the net.

DJ White followed it up with a superb point from the left wing, and two more points from Hosey saw Portlaoise move into an eight point lead. Bagenalstown were struggling to run the ball out of defence, and Portlaoise kept punishing them.

DJ White landed his third point of the game in the 13th minute, and then came another CBS goal. It was scored by Josh Mulhall, who caught the rebound from his own penalty, awarded after a foul on Hosey, to blast the ball to the roof of the net from close range.

Cormac Dunne stretched the lead out to 13 before Bagenalstown opened their account through a sweetly struck free from Darragh Mulhall, something which would become a feature of the game after half time.

Oisín Dillon added another for the Carlow men, before Cormac Dunne and Nolan swapped points. The CBS men finished the half strongly though, and another point from Paddy Hosey was quickly followed up by a goal from the same player, and Portlaoise lead 3-9 to 0-3 at the break.

Bagenalstown had their work cut out for them, but started the second half with two excellent long-range frees from Nolan, the second from all of 55 yards out. Portlaoise were under the cosh now for the first time in the game, but they handled it well, picking off a point from Hosey after a good team move.

Bagenalstown needed a goal to reall kick their challenge into life, but Portlaoise kept them in check with points from Conor Goode and Jamie Connolly to keep Bagenalstown at arms length.
A goal finally did come for the Carlow men in the 47th minute, scored by Darragh Nolan, but Portlaoise remained unflustered.

Nolan added a string of late points from frees for the Carlow school, but they never really threatened the Portlaoise lead, as the Laois men ran out comfortable and deserving winners.