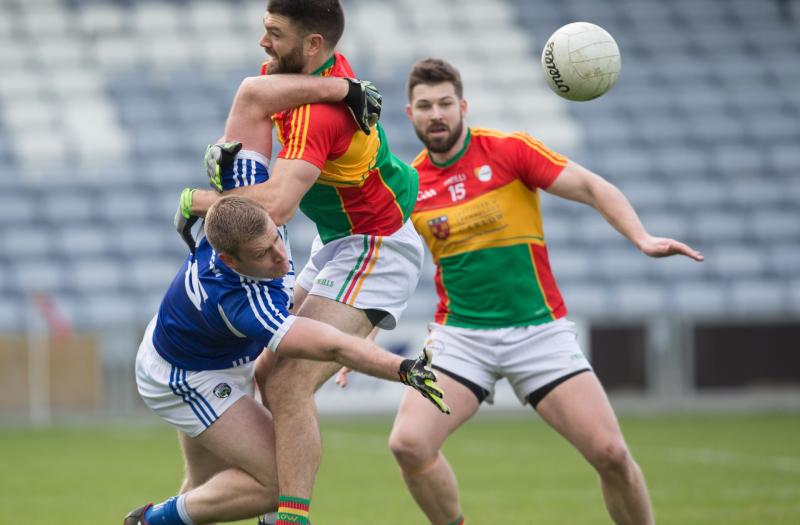 The Laois senior footballers have claimed back-to-back promotions for the first time in their history after a dramatic afternoon of action in NFL Division 3.

John Sugrue's side beat Carlow by three points in an incident-packed game at O'Moore Park, a result which made it mathematically certain Laois would be heading for Division 2, while also consigning Carlow to relegation.

There was a whirlwind start to the game, with scores and incident aplenty. A few off-the-ball incidents kept supporters busy before the first score arrived, with Paul Broderick pointing a free for Carlow in the third minute.

Laois hit back quickly, also from a free, which was pointed by Paul Cahillane. Then came the first goal of the game, and it went to the visitors. A patient Carlow build up eventually saw them put Benny Kavanagh into space on the right wing, and he raced through on goal before passing to Conor Lawler, who palmed to the net.

The Laois response was swift, as they had the ball in the net themselves a little over a minute later. Paul Cahillane won the ball on the right wing and launched a perfectly weighted ball into the penalty area, where Donie Kingston got a hand to it and directed it towards goal. Robert Sansom made the save, but Kingston gobbled up the rebound and sent the ball to the roof of the net from close range.

That left the scores tied at 1-1 apiece after eight minutes, and the rest of the half was just as keenly contested. Eoin Lowry and Paul Broderick then traded points and the teams swapped scores three more times in the next fifteen minutes, as they were level at 1-5 apiece approached half-time.

It was John Sugrue's men who found an extra gear in the run up to the break though, as even the loss of Eoin Lowry to a black card failed to curtail them. A well-worked move from a quick free ended with a good point from Kieran Lillis, and Evan O'Carroll followed up with a free moments later. Then, just before the whistle, Stephen Attride launched one over from distance and Laois had a three point lead at the changeover, 1-8 to 1-5.

Having ended the first half strongly, Laois kept that form going into the second half as well. Paul Cahillane and Paul Broderick traded early frees before Laois took control of proceedings. Evan O'Carroll kicked the next three scores of the game but Laois were on top right across the field, as they went 1-12 to 1-7 in front.

Carlow eventually steadied the ship with a couple of points from Darragh Foley, but Conor Boyle and Evan O'Carroll hit back for Laois either side of a Broderick free to leave Laois four ahead with ten minutes to play.

Any hopes Laois had of comfortably seeing out the remainder of the game were dashed when Paul Brocerick got his first from play, and sub Conor Crowley added another to make it a two point game with five left.

A frantic finish to the game followed, with Laois goalkeeper Graham Brody getting taken out of the game off the ball, while Evan O'Carroll's shot for a point clearly dropped over the bar before Robert Sansom fisted it away through the net, but somehow it wasn't given.

Carlow desperately went in search of a late score, but Ross Munnelly put the seal on a Laois win with an injury time free.