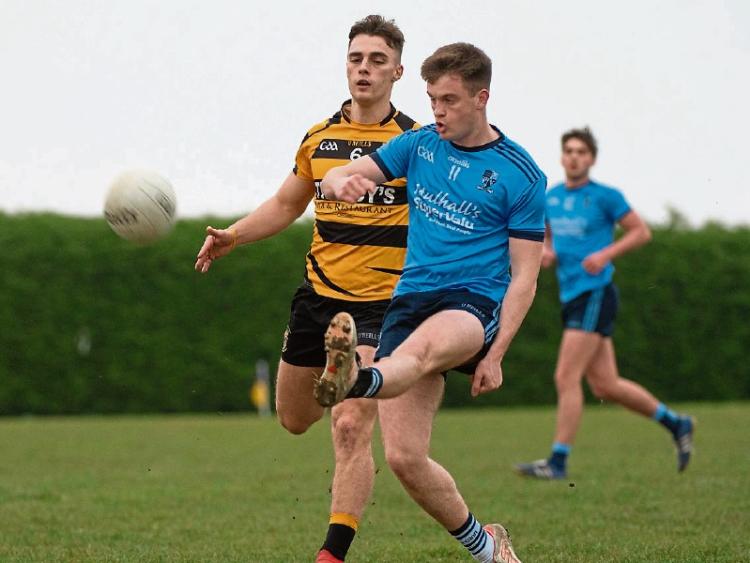 Ballyroan Abbey's Diarmuid Whelan takes a shot on despite attention from The Heath's James Phelan in their ACFL Division 1A clash.

Ballyroan Abbey got back to winning ways with a four-point away win to The Heath on Wednesday evening, scoring four goals along the way with Padraig McMahon firing 2-3 in the second-half.

Having won in the opening round with a good performance against Portarlington, Ballyroan Abbey then fell to consecutive defeats to Graiguecullen and Portlaoise. Their last fixture was played just two days prior, a heavy twelve-point defeat at home to Portlaoise.

The Heath had been on a two-win streak with wins against St Joseph’s and Arles-Kilcruise, but Ballyroan Abbey’s four goals broke their one-hundred per-cent record through first-half goals from Scott Conroy and Dylan Cuddy before former Laois servant Padraig McMahon bagged a brace at the start and end of the half.

Ballyroan Abbey opened the proceedings within the first minute, Padraig McMahon’s crossfield pass allowing Diarmuid Whelan to split the uprights via Scott Conroy. The Heath replied through centre-back James Phelan and Conor Booth did likewise directly after from a great pass from Brian Ging to put them ahead.

Ballyroan Abbey then hit two goals in as many minutes, Diarmuid Whelan supplying Conroy for the opener as he shot low past the goalkeeper. Dylan Cuddy followed up a minute later with a dipping shot into the top corner from distance to go ahead on a scoreline of 2-1 to 0-2 just five minutes into the game.

The Heath went on to outscore the visitors by five points to one, Mark Dowling hitting two following some nice passages of play while Chris Bergin, Robbie Ging and Conor Booth’s second brought them to within a point of Ballyroan.

Mark Dunne’s goal after twenty-five minutes brought his tally to 1-2 for the half and pushed them into the lead approaching the break. Chris Bergin and Jamie Whelan exchanged late points before Ballyroan Abbey were denied by the crossbar, leaving The Heath’s two point lead intact at the interval.

Ballyroan Abbey made a blistering start to the second-half, raiding The Heath’s defence for 1-3 within five minutes of the restart. Conroy set the ball rolling with the first point and then went on to provide the assist to McMahon’s goal, punishing a poor kick-out. McMahon added a further two points to give them a four-point cushion.

Chris Bergin and substitute Andrew Booth swapped scores with McMahon and Ciaran Carroll, and The Heath even had a late surge that closed the gap to two points with a Chris Bergin brace - the last of which was a brilliant effort from a tight angle.