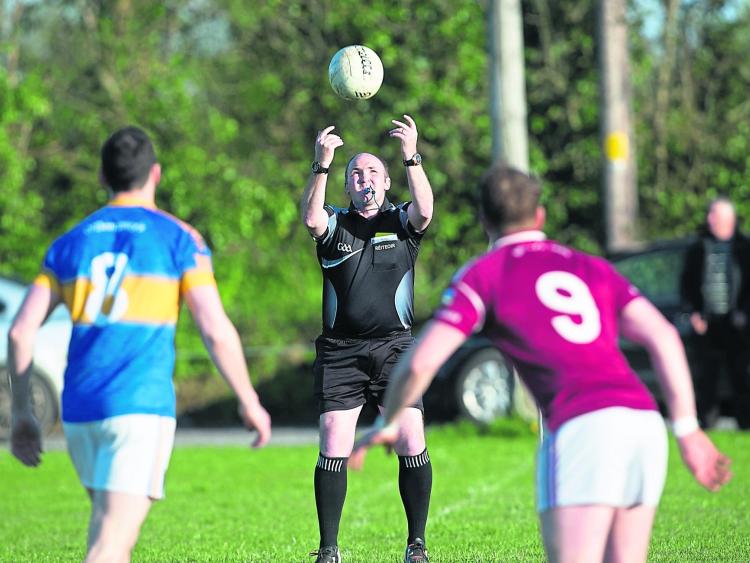 In an enjoyable game played in perfect conditions, O'Dempsey's had six points to spare over The Heath to move into second place behind Portlaoise in the table.

Before this encounter, both teams had two wins from their three games, and the prize of winning this one was moving into second, behind pace-setters Portlaoise.

O’Dempsey’s came out on top in the end after an entertaining affair with The Heath played in ideal conditions for football.

O’Dempsey’s started off on fire, scoring an unanswered 1-4 to leave The Heath with an uphill battle. Michael Finlay opened the scoring, and assisted the second, with Brian Nugent splitting the posts.

Nugent then grabbed another from a tight angle, before Michael Finlay kicked his second as well. O’Dempsey’s then turned the white flag to green with a brilliantly worked goal. Nugent found Michael Finlay, who gave it Mark Barry off the shoulder, and he played a one-two with Conor Meredith to palm to an empty net.

Chris Bergin opened The Heath’s account with a free fifteen minutes in, but Matthew Finlay replied down the other end with a free of his own from distance.

However, despite being outplayed early on, The Heath roared back into the contest with two quick-fire goals. A quick free from Chris Bergin caught the O’Dempsey’s defence out, and Andrew Booth rattled one into the roof of the net.

Only a minute after, and Ciaran Booth hit a second goal after a long ball by midfielder James Nerney.

O’Dempsey’s outscored the Heath three points to two during the closing stages of the first half to take a 1-8 to 2-3 lead at the interval.

Eoin Finlay kicked the opener for O’Dempsey’s in the second half, before The Heath reduced arrears to just one thanks to Shane Forde and James Nerney points.

O’Dempsey’s corner-back Tommy Kehoe found himself at the opposite end of the field, and placed over a nice point to put the gap back at two, but The Heath grabbed the next three to take the lead for the first time.

Two Chris Bergin scores were sandwiched between a lovely outside of the boot James Nerney point, and The Heath had their tails up.

O’Dempsey’s went in search of a response, and two Mark Barry frees were followed by a Shane Nerney goal, as O’Dempsey’s drastically turned the tables within minutes.

Shane Forde kicked a nice score to leave three between the sides, but O’Dempsey’s hit four points without reply to put the game beyond the away side.

Mark Barry and Brian Nugent frees were followed by Shane Nerney and Eoin Finlay points from play. The Heath needed goals, but they could only manage a consolation Andrew Booth point before Booth got his marching orders seconds before the final whistle.