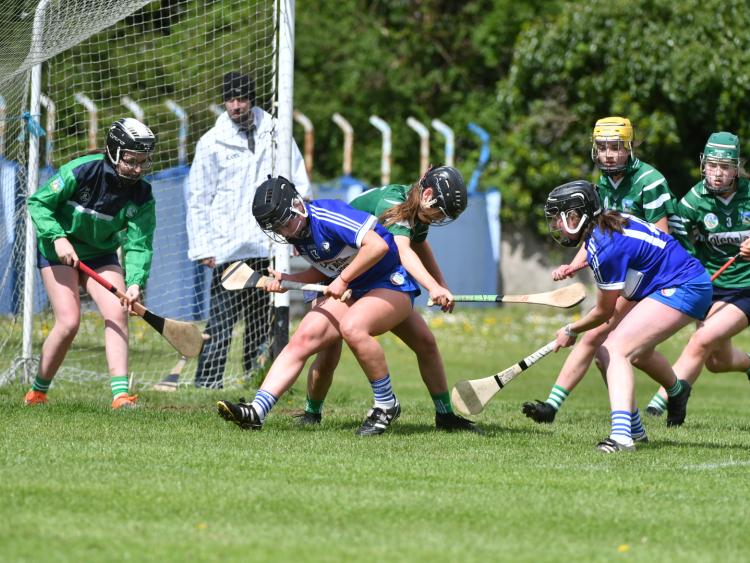 The Laois Minor Camogie team will have to do it all again next Saturday after a thrilling finale in McDonagh Park, Nenagh this afternoon.

Limerick opened the game with the strong gale force wind from Storm Hannah blowing behind their backs. Despite this, Laois opened the scoring in the early minutes with full-forward Kirsten Keenan lifting the first white flag of the day, but Iris Kenneally replied for Kevin Connolly's Limerick team inside the opening five minutes.

Laois continued their good start with Keenan rattling the Limerick net amidst a goal-mouth scramble to register the first goal of the day and edge Laois three points clear. Enya Harrington halved the Limerick deficit with a converted free from forty-five metres out, before St Lazerians' Katie Dunican excellently cleared the Laois goal-line from a certain Limerick goal.

Harrington added additional points for the Limerick cause to push them into a one-point lead with just over five minutes to go in the opening half. Limerick began to utilise their wind advantage and were growing more comfortable as the half played out, Kenneally and Harrington both adding points to the scoreboard as Limerick took a three point lead into the interval on a scoreline of 0-7 to 1-1.

A foul on Andrea Scully after the restart allowed Keenan to narrow the Limerick lead, followed by another, as Laois now trailed by one point with twenty minutes to play.

With ten minutes to play Laois got back on level terms through Clodagh Tynan's pointed free from sixty-five out to set up a dramatic final fifteen minutes. Laois forwards worked tirelessly but just couldn't get a score on the board.

Laois finally got a point to put them ahead thanks to captain Alice Walsh in the dying minutes, but it wasn't long before Limerick had a point of their own through Sinead McEillott to bring the sides back level.

Laois did have chances to win the game at the death but missed two late frees as the game finished level at 1-5 to 0-8, the replay will take place next Saturday, May 4.