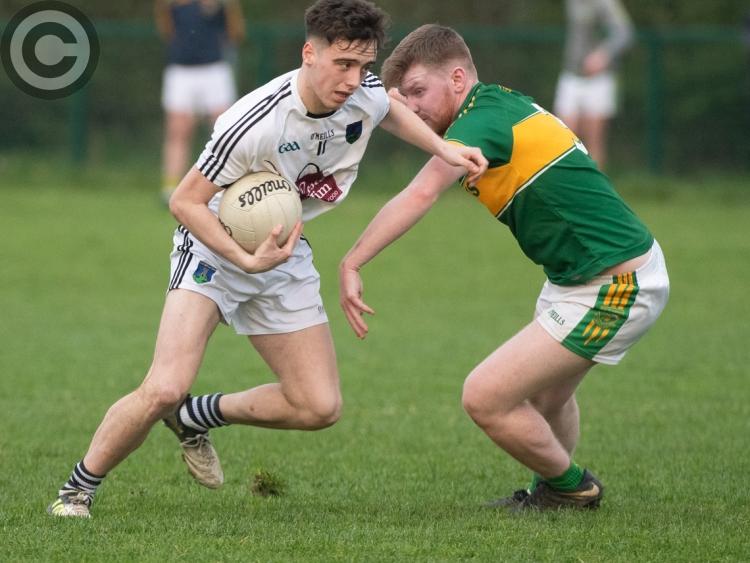 Alan Kinsella on the attack for Courtwood earlier in the League. Photo: Denis Byrne

Courtwood and Arles-Killeen played out a tight and hard-hitting contest in Ballybrittas, but Niall Dunne’s goal near the end secured the points for Courtwood to move them into second in the table behind Ballylinan.

Jason Enright opened proceedings with a point for the visitors Arles-Killeen, but Courtwood cancelled that out through a point from Luke Doran after a nice pass by Cian Doyle.

Strong play from Ian Scully to beat his marker was followed by a clever ball across the Courtwood box, and Enright put Arles-Killeen back in front.

Luke Doran then turned provider, as David Duffy fisted over from the bar to level the sides again. Courtwood then went in front, as Cian Doyle showed a strong burst of pace to race past the Arles-Killeen backline, and Doran easily kicked his second.
Doyle then almost struck for a goal, but he could only hit his shot straight at Michael Leigh for a straightforward save. David Duffy did double Courtwood’s advantage, but Arles-Killeen hit back to level the sides again.

Enright kicked a lovely outside of the boot free, before David Warren capitalized with another point after a sloppy Courtwood sideline ball in their own half.

Colm Wilson should’ve had a goal, as a quick one-two with Paddy Wilson sent him through, but he badly pulled his effort off target. Doran did put them back ahead after he was the first to react to the breaking ball in the square, and straight from the Arles-Killeen kick-out Courtwood got their goal.

Niall Dunne picked out big Danny Luttrell in space, and Luttrell fisted past Michael Leigh. Arles-Killeen fought back from the blow though, with two Enright frees sandwiched between a Brendan O’Shea score. Luttrell placed over a free to end the half, as Courtwood led 1-6 to 0-7.

Arles-Killen hit two poor wides at the beginning of the second half, but made up them with a goal instead. Enright’s free dropped short, and Courtwood keeper Matthew Byron could only fist clear to David Warren, who booted home.

Danny Luttrell leveled the teams once more with a point from play, but Arles-Killeen looked like they’d received a stern talking to at half-time, as some excellent build-up play resulted in Sean O’Shea firing them ahead.

Cian Doyle hit back with possibly the score of the match, a super point from a difficult angle. Luke Doran then had the home side in front, but Enright kicked his sixth to leave nothing separating the sides once more.

However, Courtwood finished the stronger to take the points. Luttrell (free), Cian Doyle and substitute Michael Doyle put them three points to the good. Although Enright left two in it once more, Colm Wilson restored Courtwood’s advantage, before Niall Dunne put the icing on the cake.

The sublime Luke Doran picked out Dunne’s run from distance, and the corner-forward struck a shot too powerful for Michael Leigh to save. Courtwood’s quest for back-to-back league promotions remains well on course.