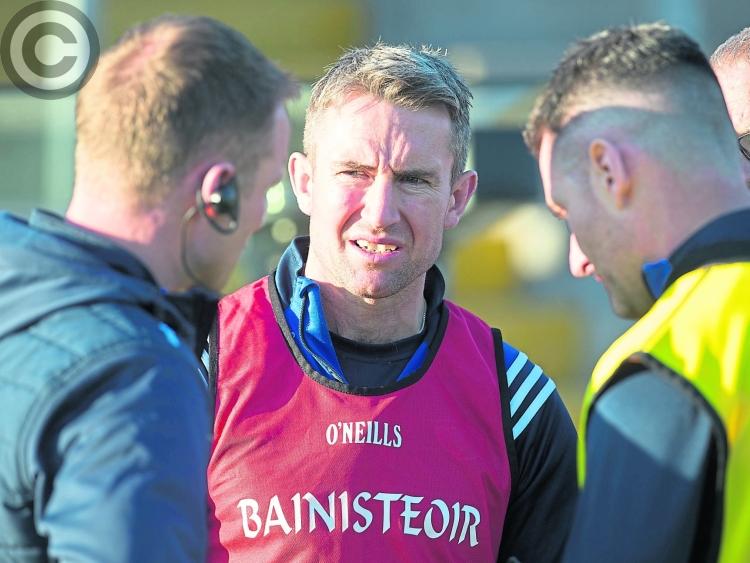 Laois manager Eddie Brennan with his management at half-time against Offaly in the Joe McDonagh Cup at O'Connor Park Picture: Alf Harvey

In the aftermath of Laois’ victory over Offaly in the opening round of the Joe McDonagh Cup on Saturday night, manager Eddie Brennan was grounded, but proud of his Laois side.

In the build-up to the game there was a lot made of the rivalry and a tight game was anticipated by all, and in the end it was a truly thrilling encounter. The eight-time All-Ireland winner said:

“Mighty battle. I think we expected nothing less to be honest. You expect that you’re coming over to Tullamore and Offaly team that are fighting for their lives so, we didn’t expect angry to be handed to us that’s for sure and we definitely had to earn that win.”

The O’Moore men made their job harder at times, letting Offaly back into the reckoning, but ultimately his side came to the fore when the game was in the melting pot:

“Definitely it gave us heart failure at times on the sideline but look a win is a win, we really had to dig it out, think there were occasions there where the lead ebbed and flowed, it took a few sucker punches.

“But I was really proud of the way the boys responded more than anything else, that every time we took a hit for a goal and we lived dangerously for a little while too but lads put their bodies on the line.

“Matthew took a full blow of a hurling ball straight into the ear and they’re the little things that are the difference on championship day.

“I was just pleased with how we applied ourselves, there’s plenty to work on there’s no doubt about that but the players can be proud about how they went out about their business today.”

Laois dug deep in the final minutes of normal time with Stephen Bergin’s crucial goal coming in the sixty-eighth minute, and then Brennan’s men had to withstand ten minutes of injury-time:

“Championship hurling is all about going to that 74th, 75th minute and 78th or 79th minute tonight, there was a couple of injuries and that’s what it’s all about, it’s staying composed, it’s not being afraid to attack the ball.

“They were coming at us hard there at times but I thought the lads dealt well with it, there was a little bit of reorganizing, it was very very physical match too. There was a lot of good physical hits which is what championship hurling is about.”

Brennan also singled out his centre-back, Ryan Mullaney, who sadly buried his sister-in-law the day before the game:

“Ryan’s a brilliant guy. If anyone was looking for a guy to anchor your team at centre back or full back, he’s top quality. It speaks volumes of the type of guy he is to be able to lose somebody so close to you during the week and still come over here and perform all around him.

“We’re lucky, there’s some great characters through the team, there’s lots of them in there and it’s just when they stick together and work together they can be a very very serious outfit.”

All-in-all, it was just the start Brennan would have wanted from his team:

“Look I think they can be very proud of that. It is only the first match won and we have to get the heads kind of clear in the morning, reset, we go again.

“Antrim had a fine win over Kerry and we’ll be very mindful of that and I think next week we have to be very tuned in, to get a win on the road is massive but it’s at home that we have to be really really focused now.”