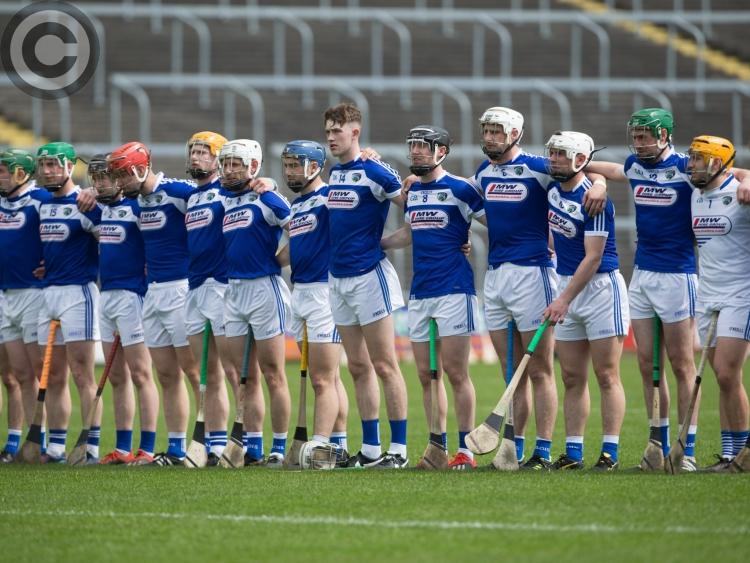 The Laois Senior hurlers stormed to their second successive victory in the Joe McDonagh Cup with a resounding eight point win over Antrim in O'Moore Park on Saturday evening.

Laois' went in ten-points clear at the interval after a fine first-half display, but they should have gone in even further ahead as they hit ten wides in the opening half, their 2-13 tally impressively split amongst ten scorers. An early goal from Paddy Purcell was followed by Laois' second through Willie Dunphy twenty minutes later. Enda Rowland pulled off two fines saves, the second a super diving save to deny Neil McManus from the penalty spot.

Laois got off to a good start with goalkeeper Enda Rowland sending over a free from his own '45 to set the scoreboard in motion. Antrim responded with a point from Paddy Burke, but Eddie Brennan's men replied emphatically with the first goal of the day from captain Paddy Purcell five minutes in.

Enda Rowland was called into action shortly after from a well-worked Antrim move to deny James McNaughton. Eoin O'Neill reduced the Antrim arrears to five points. Antrim had an opportunity to bring themselves within two points when Podge Delaney was deemed to have fouled McManus in the square. McManus stepped up to take the penalty himself, but Rowland got the better of him with a spectacular diving-save to keep his clean sheet intact.

Ross King found John Lennon and the Rosenallis man split the uprights before Willie Dunphy grabbed Laois' second goal with a low finish across the goalkeeper with twenty-five minutes played. Both sides hit another four points apiece before the interval as Laois held a ten point advantage.

Laois substitute Aaron Dunphy restarted the half with his second point of afternoon, but Antrim replied through a McNaughton free. Two Kavanagh frees and a single from Cha extended the Laois lead out to thirteen points.

Antrim rattled off three of their own Keelan Molloy (2) and McManus before Laois interrupted with Enda Rowland's second long-range free. Eoin O'Neill and McCambridge sent over points for Neal Peden's Saffrons, but Mark Kavanagh and Cha Dwyer pushed the Laois lead back out to eleven points with just over ten minutes remaining.

Neil McManus nailed a twenty-one metre free past a sea of Laois defenders and into the back of the net on the hour mark to give Antrim a glimmer of hope.

Laois substitute Stephen Bergin sent over a point for the O'Moore men, only for McManus returned it.

Antrim were reduced to fourteen men with five minutes to go when Ryan McCambridge picked up his second yellow card. Mark Kavanagh, Eric Killeen and Cha Dwyer's fifth of the game saw Laois to a deserved eight point victory, and their second win on the trot.