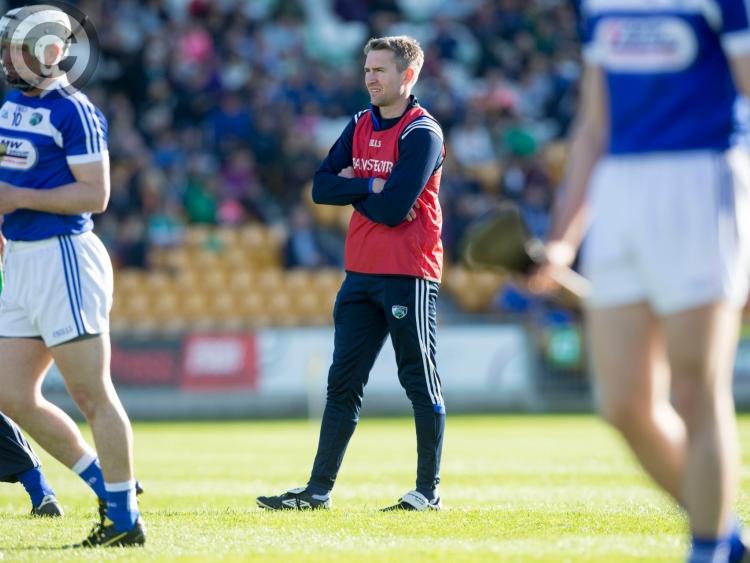 The Laois hurlers defeated Antrim to collect their second win of the Joe McDonagh Cup to put Eddie Brennan’s men top of the table and in a great position to make the final.

Laois impressed in the opening half as they posted 2-13 to the scoreboard, spread amongst ten scorers. Antrim battled back in the second half, but Laois had enough in the tank to run out eight point winners by the final whistle.

Reflecting after the match in O’Moore Park on Saturday, Brennan said:

“Job done. We’re two wins outs of two and I suppose that was the target. We wanted to be at this juncture and have our two wins out of two. That was what it was all about.

“I wouldn’t be at all pleased with that performance today.

“The second half was just careless and sloppy is how we would describe it. To be honest, I don’t think it’s anywhere near what we can do.”

Laois built up a commanding ten point lead at the interval thanks to goals from Paddy Purcell and Willie Dunphy. Similar to their performance against Offaly last week, their wide count hit double-digits by half-time for the second week in a row:

“I think look at the wides. Antrim had scandalous wides there too. So did we present them with opportunities? Absolutely.

“I just think an eight-point win today, I’d take it but I’d be disappointed with it when you look at the performance we put in in the second half. If they had to have been a tiny bit sharper they could really have punished us today.

“Credit to Antrim as well, they could have been forgiven for throwing in the towel at half-time. They didn’t, they came out in the second half and they went at us.

“We didn’t put them to bed, very easily we could have been winning by another six or seven points at half-time. By the same token ,we could have been under massive pressure because they missed a couple of goal chances, we saved a penalty. So all-in-all box ticked, but that’s all.”

Laois had a morale-boosting victory last weekend in the opening round against neighbours Offaly, but Brennan and his management team had to keep their side grounded coming into a seven-day turnaround for the Antrim game:

“We didn’t get to grips with them (in the first half) and I don’t know wether it was just a little bit of the comedown after last weekend because it was a big high, and again that is the challenge for guys is how quickly you can reset your head and refocus.

“Going over to somewhere like Tullamore will focus the heads very, very firmly. That was for me the biggest challenge today, this was all about a psychological test more than anything else to say in the space of seven days can you reboot yourself and get really up for this match and treat it as the most important match in the world. So that’s what happened and for me there’s a lot to work on."

In the other Joe McDonagh Cup game this weekend Westmeath cruised to a thirteen-point win over a struggling Offaly side in their opening game having sat out last weekend, condemning Offaly to their second loss in a row:

“I’m not overly shocked because if you were to put yourself into Westmeath’s boots at the moment, they’re hurting from losing a final last year so they have every incentive and they were waiting for that match.

“This is the nature of this competition and the completion as it stands is if you don’t get off to a good start psychologically that is the biggest challenge. And look, I completely looked at that match and said Offaly had a huge challenge to be ready for that match, and it has happened that way.

Laois now have a three-week break before their next outing away to Kerry in what will be a crucial game:

“Three weeks now to kind of get us rebooted and get ready to go. The mad thing is we’re in a great position now, but we’re not in a final.

“And that’s one thing we have to really clear the heads and get focused again because we’re fortunate that we have a nice two weeks of prep to get ready for the Kerry match.

“You’re going to somewhere where we took a nice trimming last year and that’s going to be a big challenge in itself. I expect a massive performance out of Kerry so we’re going to have to roll-up the sleeves and get stuck in.

“It’s leaning towards ourselves and Westmeath, but we can’t look at it that way. We can not look at that now, we have to give Kerry their due respect. We have to make sure we take care of our own business, and we have to go and we have to beat Kerry. It’s that simple.”