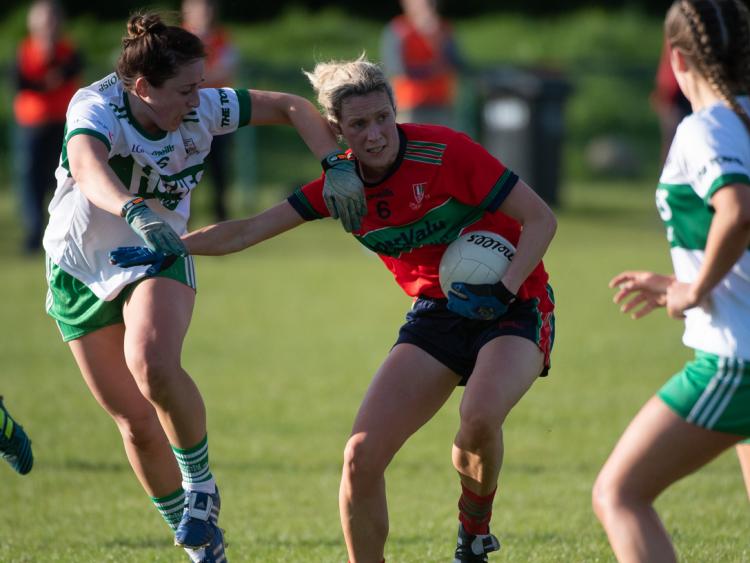 With ten minutes left, this game looked done and dusted as Portlaoise led by nine, and were defending strongly. However, inspired by centre-forward Mo Nerney, Timahoe staged a comeback to earn a draw in Rathleague.

Leah Loughman began proceedings with a free, before Mo Nerney replied for Timahoe. Portlaoise then grabbed the first of their four goals.

Fiona Dooley played a one-two with Aisling Kehoe, and Dooley’s long dropping shot caught keeper Lisa Daly out and found the back of the net.

Timahoe replied well, with Maggie Murphy firing over from a short Mo Nerney free. The next score was a similar play, but this time Murphy gave it quickly to Nerney and she pointed.

Aisling Kehoe responded for Portlaoise after she was rewarded with a score from running at the Timahoe defence. Timahoe reduced the gap to two points for a short while, as Orlaith Hennessy found the bottom left corner after good build-up play involving Nerney.

However, Portlaoise hit straight back with a goal from corner-forward Leah Loughman. Aisling Kehoe’s point attempt dropped short, and despite her size, remarkably Loughman rose above her marker and the keeper to fist home.

Aisling Kehoe earned two frees in a row for Portlaoise after, and despite missing the first opportunity, Grainne Moran steadied herself to convert at the second time of asking.

Nerney then fired over a fine point, before Orlaith Hennessy came close to grabbing a second goal. After a nice ball by Maggie Murphy, Hennessy fended off her marker, but struck the post.

Grainne Moran pointed the last score of the half, as Portlaoise led by six.

Moran also got the opening point of the second half, as Timahoe had to contend with fourteen women due to the sin-binning of Jenny Murphy. Maggie Murphy did leave six in it once more, before Timahoe were let off the hook twice.

Aisling Kehoe hit the post with her first effort at goal, and blazed her second chance well wide after good work from the lightning Julia Cahill. They did get their goal though, as Ellen Healy caught a Timahoe kick-out and stormed through, with a superb finish at the end of it.

Mo Nerney and Grainne Moran traded points, as Timahoe looked dead and buried. However, they hit an amazing 2-3 without reply to earn a draw.

Nerney was central, as her point kick-started it, and she then struck for a goal. Portlaoise were dispossessed in their half, and Nerney ruthlessly punished.She then knocked over a free, before Orlaith Hennessy left three in it.

With Portlaoise feeling the pressure, Sarah Quigley managed to win a Portlaoise kick-out, and she gave it to Nerney, and the result was never in doubt as she buried it past Aoife Hyland-Conlon.