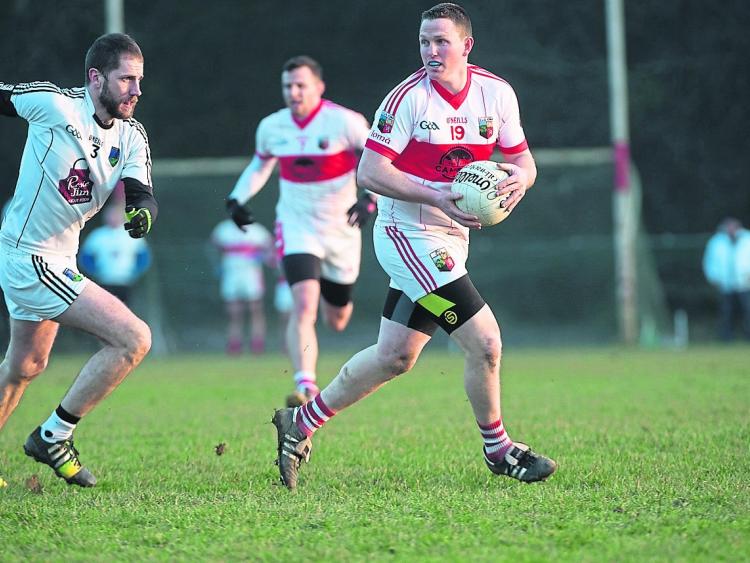 In a game where both teams failed to play to their true potential, it was Courtwood who deservedly picked up the points in this parish derby and race for promotion in Division 1B at Ballybrittas on Wednesday evening.

Courtwood dominated the opening stages, but their shooting let them down. They finally settled when Niall Dunne blocked an Emo ball in his own half, charged up field, and gave it to Luke Doran, who pointed.

Dunne again blocked another Emo ball in the following passage of play, and this time Doran forced Emo to foul him, allowing Danny Luttrell to place over.

Doran put the home side three up with a nice score, before Emo spurned an opportunity to level. Stephen Norton broke the Courtwood defensive rearguard, but his shot was a simple one for Matthew Byron to save in goals. Darren Strong did knock over the resulting 45’ to get Emo on the scoreboard.

The returning Luke Doyle, who had been plagued by injuries all last year, kicked a free, before Cian Doyle added another for Courtwood.

Paul Lawlor pointed a free for Emo, but Luttrell replied down the other end with an even better sweet long-range placed ball.

Courtwood grabbed the last score of the half, as Andrew Flynn raced up field, found Luke Doyle, who turned on a sixpence and curled over. Courtwood led 0-7 to 0-2 at the half-time, but it should’ve been a lot more from their perspective.

Emo, having scored just a single point from play in the first half, were given a stern talking to at half-time, and got back into the game. Jack Owens struck a super score to open the second half, before Lawlor placed over a free.

Lawlor was then deemed to have been hauled down in the square by referee Brendan Hickey, and he dispatched the penalty to level the sides.

Courtwood responded well to the blow, as Luke Doyle and Danny Luttrell both kicked over a free each. Lawlor left one in it, as he sold a trademark dummy to Rob Flynn and split the posts.

The talented Niall Dunne got on the score-sheet for Courtwood, and Mark O’Halloran came up from full-back to kick another lovely score on the turn.

Lawlor reduced arrears to two, before both sides had a period of play where they were guilty of spurning opportunities.

Emo midfielder James Hillard was sent into the square, and he managed to pluck a ball, but his shot was well blocked by Courtwood bodies.

Good running from Nigel Murphy and Finbarr Crowley resulted in Lawlor leaving one in it from a free again, but the game finished with a fisted Doran score and Courtwood took the points.