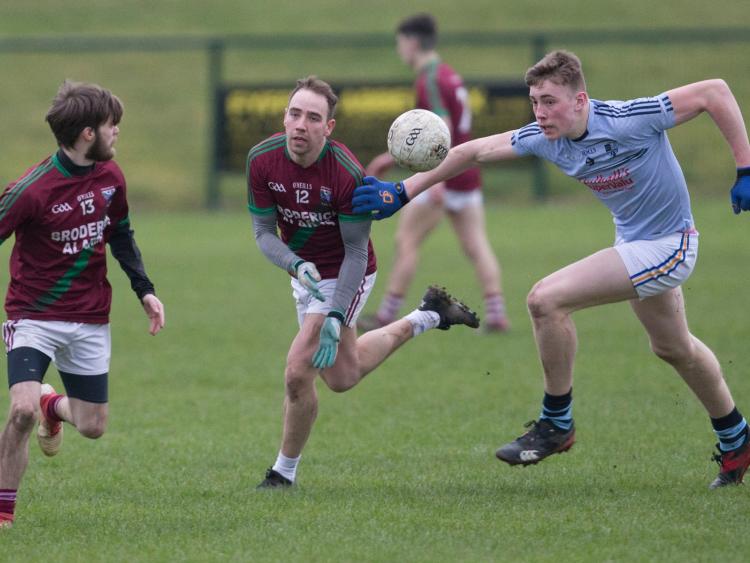 After suffering a narrow loss to parish rivals O’Dempsey’s the last day out, Portarlington got back on track with a win over Ballyroan Abbey in McCann Park, as they moved clear of the bottom two.

The hosts started off strongly, with Jake Foster and Colin Slevin putting them into an early two point advantage. Ballyroan Abbey responded well though, as Laois U-20 captain Diarmuid Whelan knocked over two frees to level the teams.

Whelan’s vice-captain was also playing, as Portarlinton’s Colin Slevin picked out the run of wing-back Alex Mohan, and he shot went in off the post. Slevin then doubled their advantage, as he chose to put over when the goal opportunity came his way.

Ronan Coffey, who’s one of five players who were playing tonight that are on the panel for Thursday’s U-20’s game, played a one-two with Jake Foster and kicked over with his left.

MJ Tierney hit back with a placed ball for Ballyroan Abbey, and Scott Conroy reduced arrears to one after a nice give and go with Tierney.

Coffey replied with a point off his right this time, and then Slevin curled over a lovely score to make it a three point game. Foster added two quick-fire points, with Ballyroan Abbey grabbing the final score of the half through Scott Conroy who was under pressure but hit the target anyway.

The half-time score read 0-9 to 0-5 in favour of Portarlington, but it could have been a lot more with the amount of possession they had.

The lively Foster brought Portarlington into double figures after the break, as he did well to get out in front and swing over. Ballyroan Abbey replied well though, as Enda McWey jinked left and right before taking his point well, and then MJ Tierney left three in it with a free.

Foster responded with a free down the other end, and the other Portarlington corner-forward scored another. Coffey played a good ball to Foster and he unselfishly gave it to Steven Lyons, and his high effort dropped just over.

Tierney fired over a deadly accurate long-range free to keep Ballyroan Abbey within four, but they didn’t look like they had enough to get close enough to Portarlington.

Adam Ryan got on the score-sheet, as nice build-up play involving Colin Slevin and Jonathan Fulham resulted in the midfielder making it a five point contest again.

Diarmuid Whelan got his first from play, before Slevin replied for Portarlington. Enda McWey and Jonathan Fulham exchanged scores, before Cathal Bennet put Portarlington six up.

Ciaran Carroll and Slevin traded scores, before Ballyroan Abbey got a lifeline when Padraig McMahon hit the net. However, a Foster free sealed the win for Portarlington.