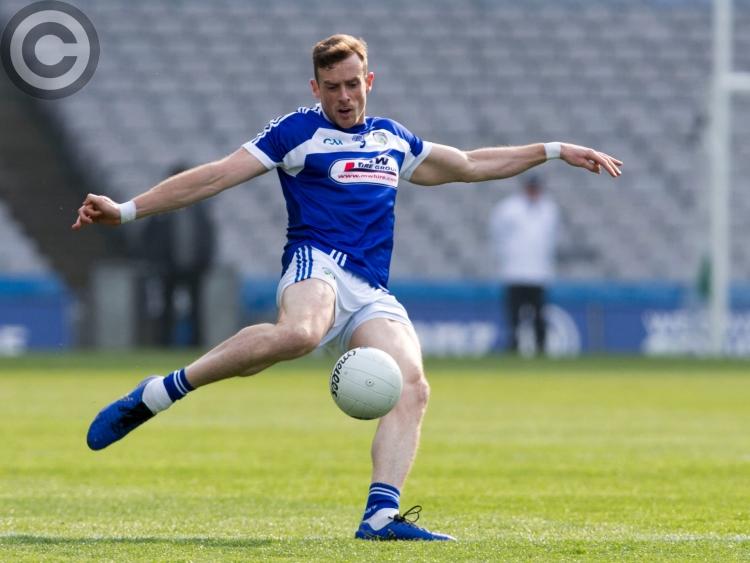 The Laois Senior footballers left it all on the field in O’Connor Park this afternoon, and they were rewarded with a deserved two-point victory over Westmeath.

Laois suffered two defeats at the hands of Westmeath this year already, the Division 3 League final back in April and their earlier meeting in the League. While it may be 2-1 in the trilogy, John Sugrue’s men made their mark on the Championship stage.

Every Laois player that took to the field today had their part to play, and Portlaoise’s Kieran Lillis has been a mainstay in the Laois midfield. Lillis played the duration in Tullamore and was central to Laois’ success, and he was happy to get a win under their belts:

“Look it’s great to get our first win in the championship this year. We had two tough battles against them in the league and we just came out the wrong side of it.

“So we tried to rectify a few little issues that we thought we needed to and it looks like we did today, thank god.

“It was just our basic handling, our basic ball retention, our basic shot selection. Just the basics. Get them right and have our work rate in order and our heads right, and look we’ll give it a good rattle to lot of teams out there.”

Evan O’Carroll has been in scintillating form this season across the League and now Championship for Laois, as well as his performances for UCD in the Sigerson Cup, coming to the fore today with an eight-point haul in Donie Kingston’s absence.

“Yeah he (Evan O’Carroll) oozes talent. He’s a super footballer, he’s got all the skills. He’s a big man, he’s mobile and he really, really loves playing with Laois.

“You could see it out there, eight points is phenomenal for any inter-county performance and it’s great that we got it today.”

John Sugrue named his starting-fifteen on Friday night, in it he included four debutantes while planning without the likes of captain Stephen Attride and talisman Donie Kingston.

“Yeah we had a lot of ins and outs in the team over the league, no one knew exactly what fifteen would start on any given day. It just shows the competitiveness in the squad.

Laois have enjoyed a fruitful two years under Sugrue’s reign. Back-to-back promotions, a Division 3 title, a Leinster final and now another trip to Croke Park for their semi-final clash against Meath in two weeks time:

“We set out our stall at the start of the year. We know our goals and we’re trying every session, everything that’s asked of us, we’re trying to get the most out of ourselves so we can achieve those goals.

“So far we’re on track, it’s step one and as John says we’ll take out the measuring tape and measure ourselves against the next opposition.”

The wind was a major factor in today’s game. Laois played with a swirling wind behind their backs in the opening half, using it to their advantage to build-up a six point lead by the break that would ultimately see them weather Westmeath’s fightback in the latter stages.

“It’s a strong wind out here, and we knew we had to capitalize on that. We got the ball to the scorers as much as we could and they slotted it for us today, thank god.

“Very hard when you look up, you need to really have an acre of space in front of the forward to pop it into him. Especially against the wind, and then on the other hand when you’re kicking it into the forward you’re overcooking it and you’re wary of that.”

It’s fair to say that Laois came out on the more favourable side of the draw, avoiding the reigning Leinster and All-Ireland champions Dublin until the Leinster final at the earliest as they go in search of their fifth Sam Maguire Cup and ninth Delaney Cup in-a-row. One step at a time, but should Laois navigate past the challenge of Meath, it’s highly likely that Jim Gavin’s side will await them in the final.

“The Dubs are a phenomenal team and there’s no one that can really hold a candle to them at the moment. You could see last night that their power all over the pitch is unbelievable.

“Everyone wants to be up there with Dublin and we’re trying our hardest to get the most out of ourselves to be able to compete with Dublin for as long as we can, like every other team.

“I think we have the goods, we have the tools to put it up to most teams. It’s just about us bringing it to the field and producing it on the day like we did today.”