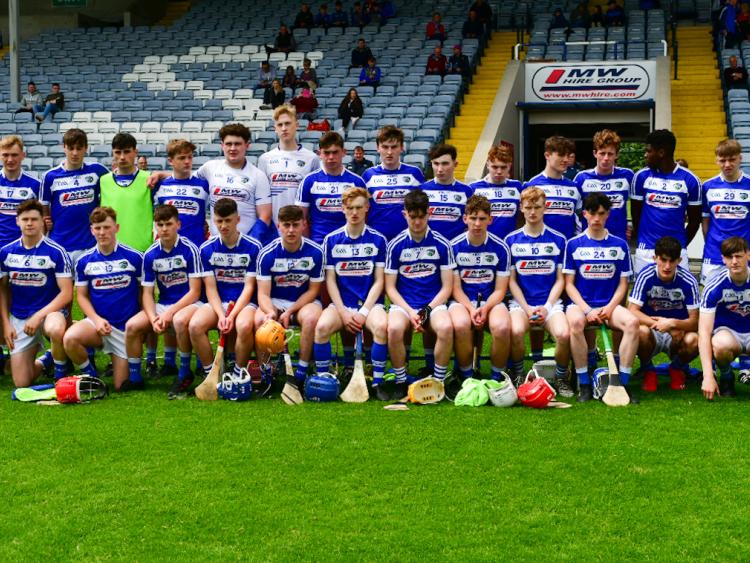 The Laois Minor hurlers bowed out of the Leinster Championship at the quarter-final stage at hands of Wexford this afternoon at O'Moore Park.

Enda Lyons' side put in a solid first-half performance that saw them level five minutes before the break, but a late 1-3 from the visitors before the break pushed them ahead. Wexford found another gear in the second-half to pull well clear, and despite a late Laois flurry which included a Cathal O'Shaughnessy goal Wexford finished with plenty to spare.

Laois opened the scoring through an Adam Kirwan free from the half-way mark in the first minute. Laois were then dealt an early blow when Wexford lifted the first green flag of the afternoon two minutes inwhen David Cantwell flicked to an empty net following a mix-up in the Laois defence.

Kirwan sent over a free from the left sideline and then David Dooley and Mossy Keyes combined to see the latter split the uprights from a narrow angle to bring Laois back level. John Sheil edged Wexford back into the lead, and then Laois almost had a goal when James Duggan pulled from the deck only for the Wexford goalkeeper Cian Byrne to turn his effort away.

Kirwan and the resident Wexford free-taker AJ Redmond exchanged frees and then full-forward James Duggan fired over from the sideline to bring Laois back level. Laois had another goal chance denied when Dooley played Kirwan through, but his low shot was excellently denied by Byrne.

Laois briefly took the lead for the first time when Kirwan sent over his fourth free on the quarter of an hour mark, but Wexford hit-back instantly through Dylan O'Neill and Redmond to re-take the lead.

Kirwan shot another free and Mossy Keyes sent over a good point off the hurl under pressure, either side of a Luke Kavanagh point for the visitors as Laois got back level with seven minutes to go until break.

Wexford found their stride in the final five minutes of the half to hit an unanswered 1-3 to storm ahead. A brace of frees from Redmond and a greats score from Cantwell out on the far sideline preceded Richie Lawlor's inspiring goal. The Faythe Harriers man claimed the Laois puck-out before setting off on a daring run through the heart of the Laois defence to fire their second goal of the game to see them lead 2-8 to 0-8 at the interval.

Laois reopened the half with a Kirwan free four minutes after the restart, but Wexford took control from here with 1-3 unanswered, the goal coming from a Cantwell bullet from 20 metres. Kirwan shot back with a free for Laois forty-three minutes in, but Wexford continued to roam forward.

A penalty from substitute Cian Byrne rattled the Laois net as we headed into the final quarter of an hour, and points followed from Justin Moran (2), Cian Byrne (2) and Sheil.

Laois rallied in the final minutes with substitute Dan Delaney taking over the free-taking responsibilities from Kirwan to land five points when introduced as well as a late consolation goal from Cathal O'Shaughnessy in the first minute of injury-time.