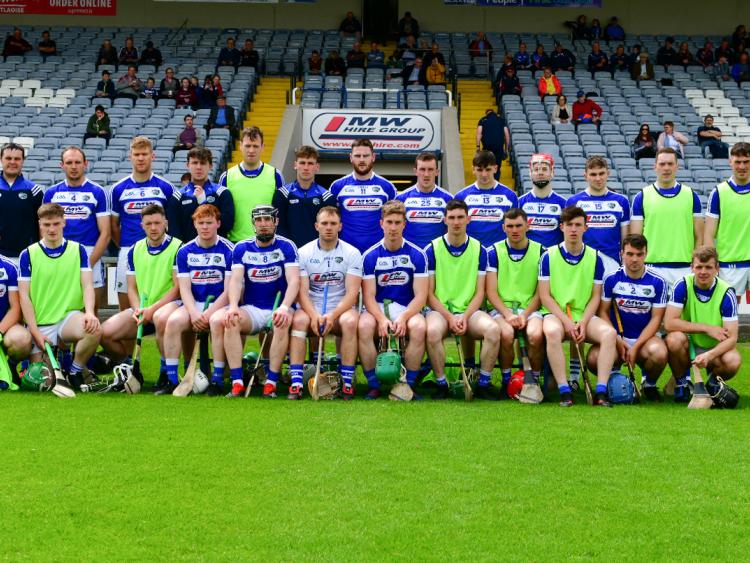 An injury-time free from substitute Eoin Gaughan split the honours in O'Moore Park as Laois drew with Westmeath in their final group game before they meet again in the Joe McDonagh Cup final at the end of the month.

Laois opened the scoring straight from the throw-in with Picky Maher firing over from the left flank to set them underway with twenty seconds elapsed. Westmeath hit-back with a sixty-five straight in front of the posts from Killian Doyle to level the sides .

Laois went on to hit four wides in a row before the ten minute mark with Maher missing a free and a sixty-five, while Aaron Dunphy and Stephen Bergin were both off target also.  Westmeath took the lead with three unanswered points through Joey Boyle, Killian Doyle and Robbie Greville.

Laois replied with Jack Kelly playing a clever one-two with Neil Foyle before sending the ball between the posts. Westmeath corner-back Gary Greville restored their lead to three points, but a well-worked passing move from Laois was finished by Jack Kelly for his second of the day. The only goal of the half arrived nineteen minutes in when Derek McNicholas supplied Robbie Greville to crash into the Laois net.

Laois hit three points on the hop through Maher (2) and Enda Rowland to close the gap to the goal. Westmeath finished the half the stronger with Killian Doyle, Ciaran Doyle, Allan Devine and Aonghus Clarke all raising white flags for the Lake County, while Laois managed two through Maher and Matthew Whelan as two goal chances were turned away.

Laois emerged for the second half and quickly closed the gap back to a goal with Stephen Bergin and substitute Eoin Gaughan splitting the posts. Westmeath hit three of their own through Killian Doyle (2) and Boyle, but then Laois hit a purple patch to raid the Westmeath defence for 1-5, Mark Dowling rattling the Westmeath net to leave Laois three points ahead.

Westmeath landed three points in a row through substitute Darragh Clinton (2) and Robbie Greville to level the sides at 1-16 apiece. A Picky Maher free and Stephen Bergin's second edged Laois back into the lead, but Westmeath rattled off four to storm into the lead with five minutes to go.

Laois got back level on the stroke of seventy minutes, but there was to be a late twist as Westmeath went ahead in the first minute of injury-time with Killian Doyle's tenth point which looked to have sealed the win. Eoin Gaughan had two late chances to level for Laois, missing the first but making no mistake with the second to split the honours.

Laois will go on to meet Westmeath again in the final in two weeks time at Croke Park.