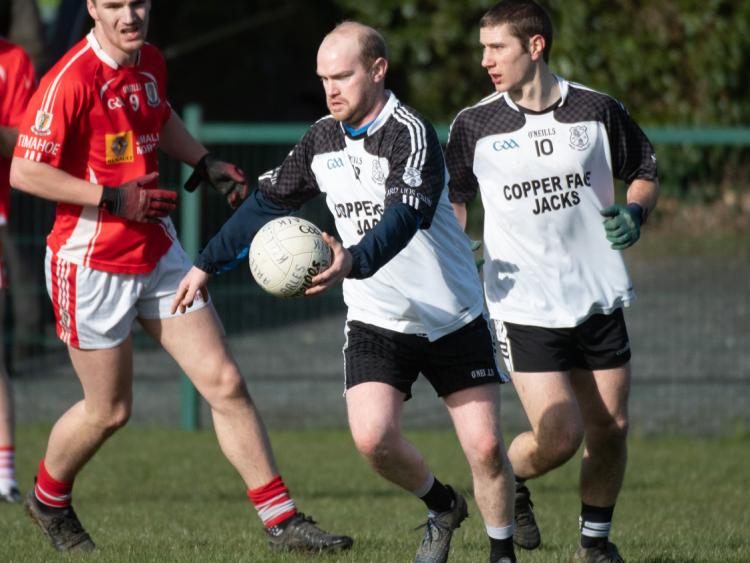 Donie Brennan in action for Arles-Killeen in the Kelly Cup against Timahoe.

Superb performances from Donie Brennan and goalkeeper Michael Leigh helped Arles-Killeen maintain some small hope of gaining promotion from Division 1B. The hosts comfortably beat Killeshin, who are still only one point above safety.

Killeshin got off the first shot of the game, but James Doogue saw his attempt fall harmlessly wide. They were first on the scoreboard though, as Gavin Brennan picked out the run of Ross Bolger, and he took his point well. Bolger had a goal opportunity shortly after, but his effort was straight at Michael Leigh and Cathal Brennan popped over the rebound.

Conor Keightley got the home side on the board with a point, but Killeshin scored the next three. Cathal Brennan (free), Fionn Maher and James Doogue all raised white flags.

Arles-Killeen responded in typical fashion, as points from Brendan O’Shea and Donie Brennan were followed by their first goal of the game. Brennan and Sean O’Shea exchanged handpasses, before Ian Scully calmly trickled the ball into the side of the net.

James Doogue replied with a point after Alan Brennan spotted his run, but Killeshin wouldn’t score for the remainder of the half.

Arles-Killeen full-forward Ian Scully held off his man as he cut inside and picked out substitute Enda McDonald, but his volley was blocked by scrambling Killeshin defenders. Killeshin’s Ross Bolger had another chance down the other end as he burst through, but again Leigh denied him.

It was the Donie Brennan show after that, as he rolled back the years with four excellent scores. The pick of the points was his second as he solo-dummied past Arnie Mahon, and sliced over with the outside of his boot.

Sean O’Shea, who was involved in the build-up to most of Brennan’s points, turned scorer after a quick Brennan free. Further points from Sean O’Shea and Aidan O’Rourke meant Arles-Killeen led by eight at half-time.

Arles-Killeen began the second half where they left off in the first as Brennan slotted a free before grabbing a goal for himself. A hopeful long ball was fired in by Brendan O’Shea, but Killeshin goalkeeper Gavin Deering fumbled and Brennan tapped home into an empty net.

Brennan kicked another free, before Killeshin got on the scoreboard for the second half with Cathal Brennan and Pat Doyle scores.

Conor Keightley replied for Arles-Killeen with a point after a swift counter-attack, before Michael Leigh pulled off his third save, this time from Pat Doyle.

Another stunning save followed from Leigh, as he denied Cathal Brennan this time after the keeper bailed out his defence for giving the ball cheaply.

Sean O’Shea and Ian Scully points put more daylight between the teams. Killeshin’s Luke Attride and Sean O’Shea traded points, before Arles-Killeen took their foot of the gas and let Killeshin dominate the remainder of the affair.

Cathal Brennan (two), Pat Doyle, Fionn Maher, Brian Lowry and Ross Bolger all kicked points, but it was too little, too late for Killeshin.